The Story of my Visa Run to Tachileik in Myanmar

After my horrendous experience of renting my first apartment in Chiang Mai, I was lucky to get out. But this time I was forced to. I had a double-entry visa for Thailand, which meant I could stay here for 60 days, extend it for another 30 days at the immigration office, then leave the country and come back in immediately (aka a visa run).

Since I was located in Chiang Mai, the easiest way to go about this was to take a bus to Mae Sai, which is near the Burmese border. I bought a Green Bus ticket on Suthep Road which was about 1000 THB (25 EUR) and visited the station in the north east of Chiang Mai. 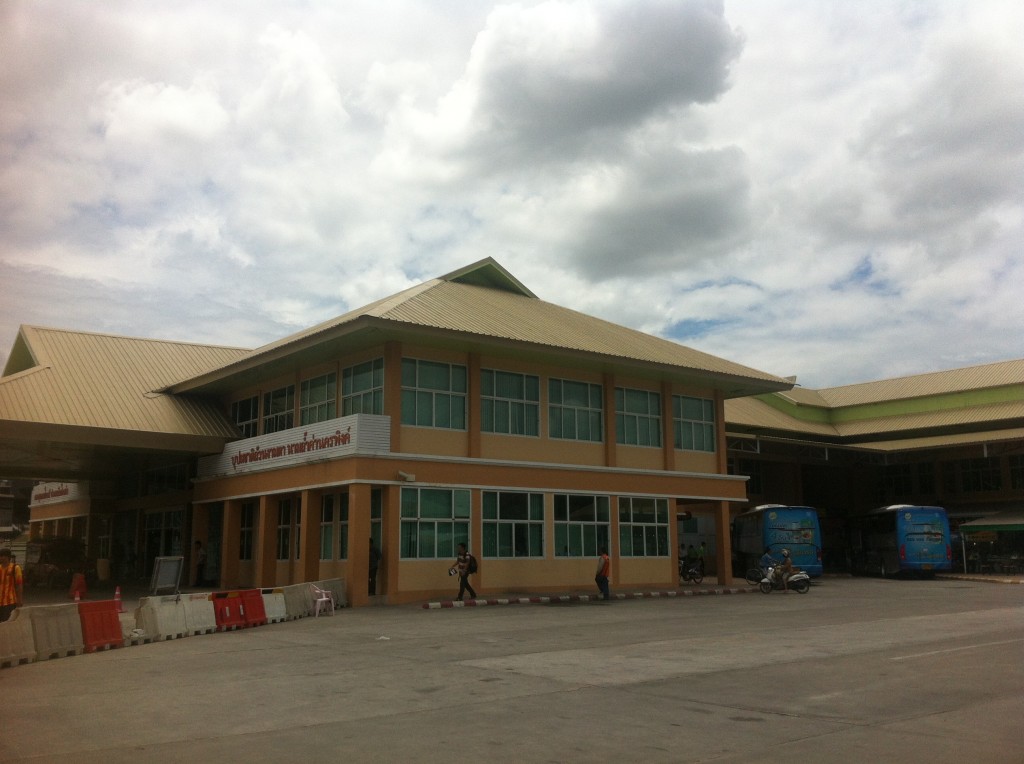 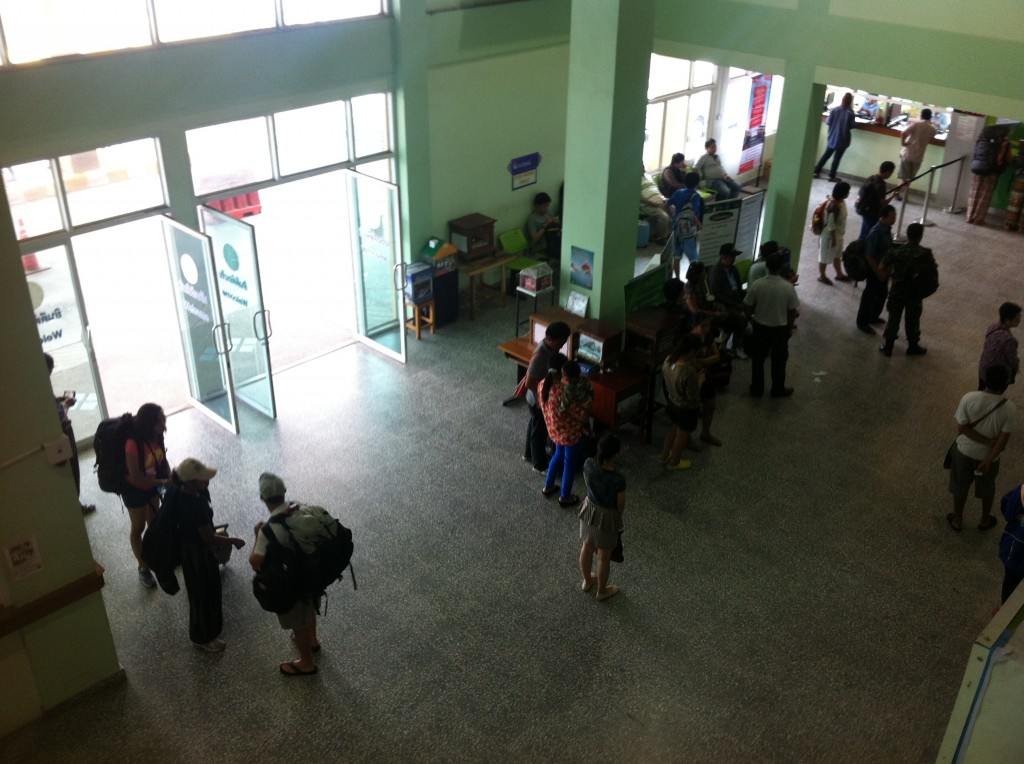 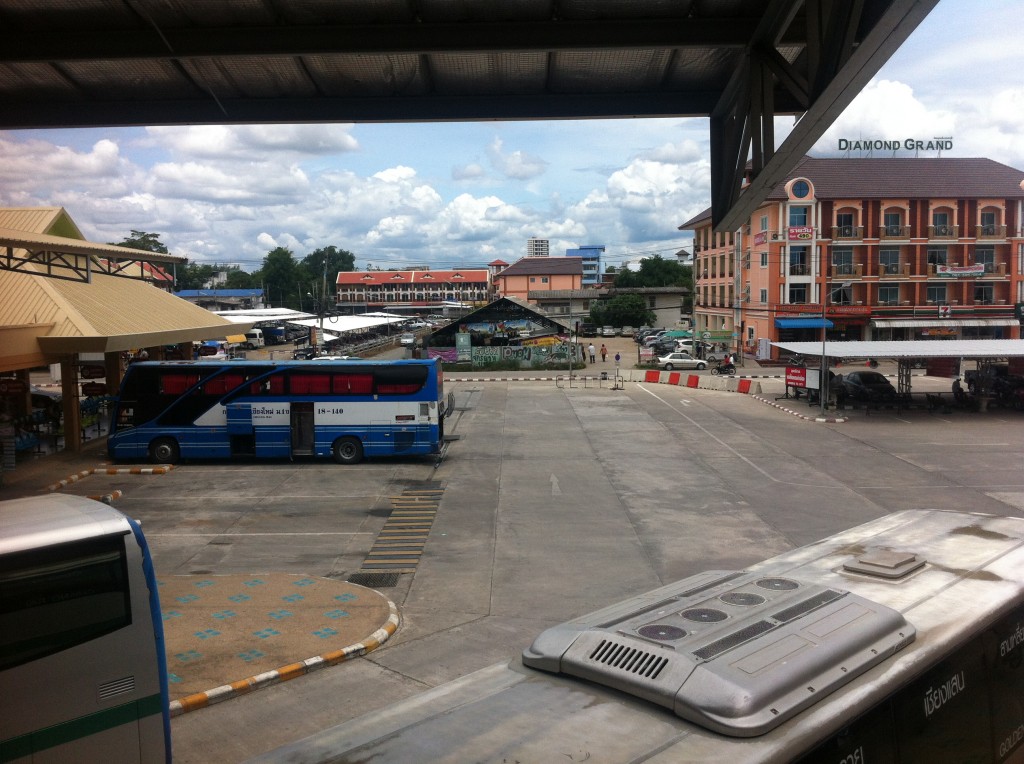 It was about 5 hours of driving. 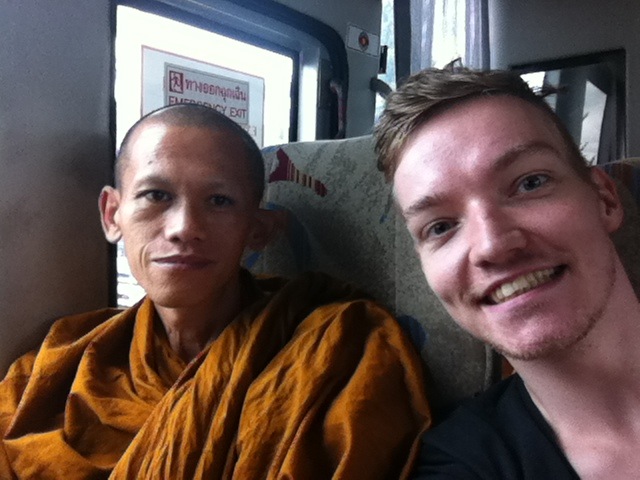 I was sitting next to a really friendly monk, who barely spoke English, but we were able to communicate quite well with hand signals and live audio translations from Google Translate on my iPhone. I was stunned that this monk had a Samsung Galaxy S3 phone, while I always thought monks weren’t allowed possessions. I guess monks have to stay in touch away from the temple too…

When I arrived at the bus station in Maei Sai, I still had to take 15 minute a red bus (songthaew in Thai) to the border. I bought a can of Coca-Cola and put it in my backpack, since I had no idea if they sold anything normal across the border. Now from here things started getting exponentially crazier. 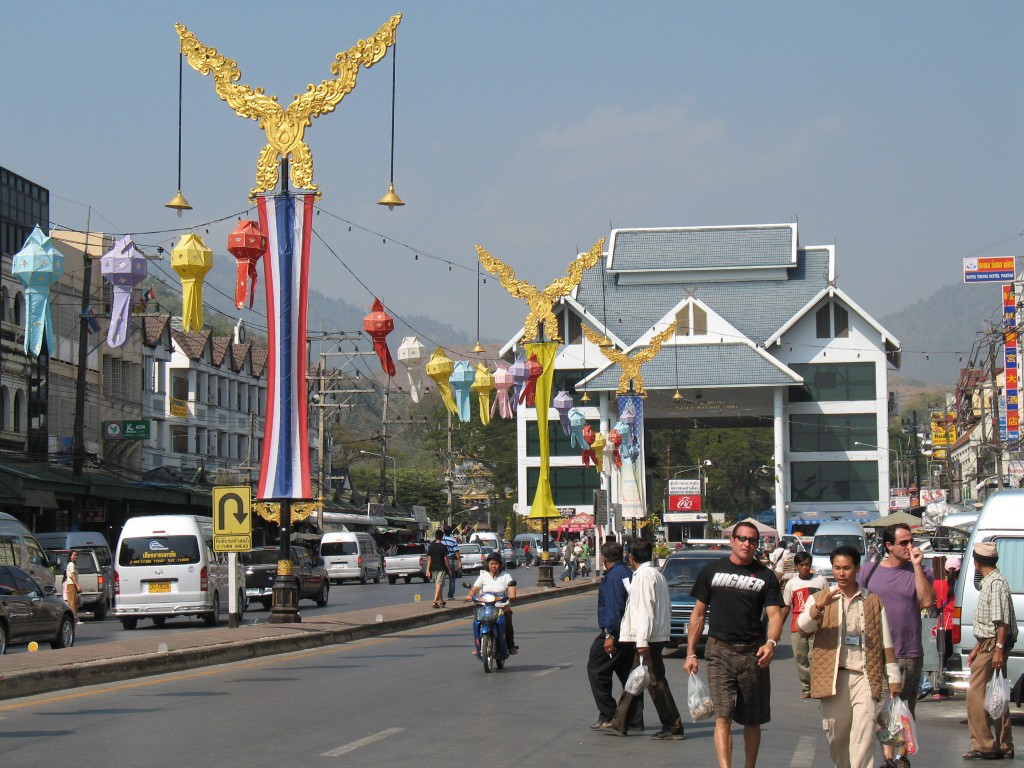 The main road to the border was this weird Iraqi looking victory road with golden arches and poles decorated with swords. When I finally arrived at the border, I became a little tense.

Where 99% of foreigners that go to Mae Sai for a visa run immediately walk back into Thailand after literally stepping into Myanmar for 5 seconds, I thought it’d be nice to stay for at least a day and see what was up. This was going to be interesting to say the least. I must say that I like these kinds of trips. Traveling in Thailand becomes kinda boring because it’s so comfortable. You need a little bit of danger to make you feel on edge. You want to feel the adrenaline. But was staying there pushing my luck?

I was going into Myanmar, a (former) fascist dictatorship which was still pretty unsafe for foreigners. The border town I was going to visit to do my visa run was called Tachileik and was in particular quite dangerous. It was home to the Golden Triangle, the drug-smuggling hot spot of Asia home to extremely violent drug trafficking cartels, with bombs going off regularly and over 100 kidnappings every year in the city itself. Not to mention, Tachileik was on a very active earthquake fault line.

Did I tell you, I found out about this AFTER I entered the city?

What made me feel a little more safe was America’s intense political and economic involvement in opening up Myanmar in the last few years. Obviously to create an American ally bordering on China. If America was running this place, they’d obviously protect little Panic Pete. 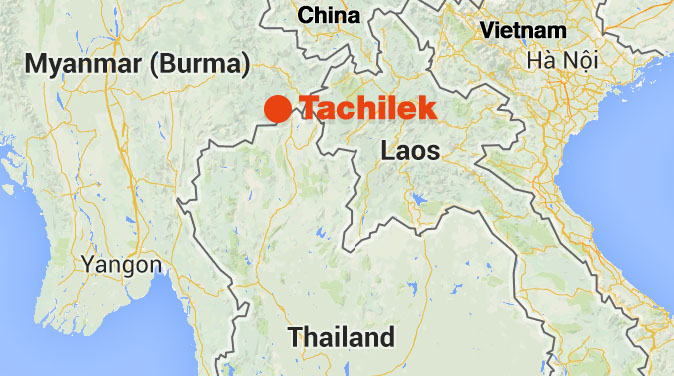 It’s quite obvious why Tachileik is a trading and smuggling hot spot, it’s located between Thailand, Laos and relatively close to China and even Vietnam. 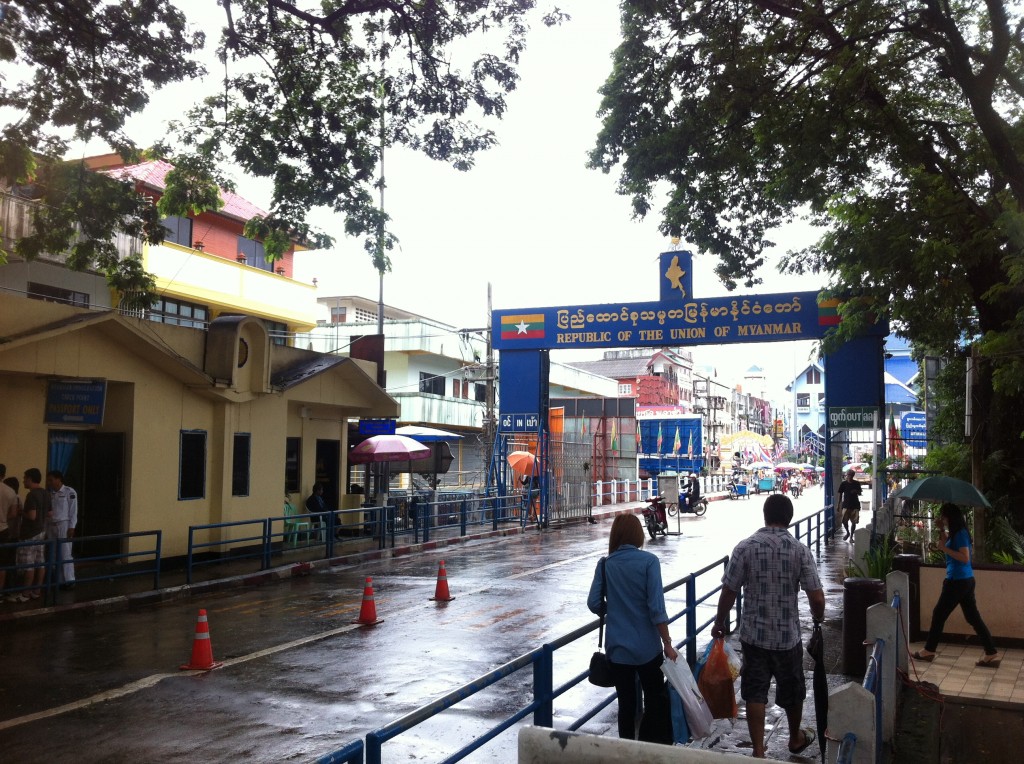 The border crossing was quite special. I walked to the crossing, the Thai stamped my passport and I walked towards the Burmese side. Suddenly there was a guy following me. Since I’m paranoid as fuck, I stopped walking and he took me over and introduced himself. Since I wasn’t really in for chit-chat, and I was about to enter Myanmar, I told him I wasn’t interested. But he was interested.

He said he worked for the Myanmar Secret Police and was my escort and instructed me to follow him. Oh fuck. So I followed him. This whole thing felt more and more tense. Everything was going wrong. Panic Pete was in full effect. There was already a heavy vibe in the air and being escorted by Secret Police didn’t help a bit.

Walking further towards the border crossing, suddenly I hear a huge explosion behind me, and I see everybody around me dive down, including the secret police agent. This is it. My first bomb explosion. I’m in the middle of it. Instead of frags hitting me, we’re all hit by a spray of liquid coming from the ground. When it hits my tongue I can taste Coca-Cola; I managed to bring a can of hyper-pressurized Coca-Cola into Myanmar, let it fall from my bag, and have it explode when it hit the asphalt. 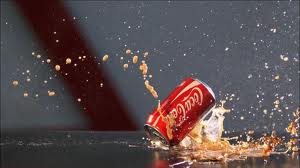 I was sprayed with Coke a little, but when I looked to the left I could see my secret police agent friend flooded in it, with his entire uniform wet. I quickly exclaimed “sorry, sorry, sorry” about a hundred times. This just happened. My secret police friend was relaxed about it and repeated “no problem”. Thanks USA for your involvement, I’m sure if you weren’t, the Burmese would’ve beaten me up.

The agent spoke amazing English (for Asian standards), way better than any Thai border staff. As my personal escort, I definitely received special treatment as a Westerner, which felt weird since all the other travelers (Thai, Burmese and Lao people) had to wait. Again, it all seemed to have to do with the USA’s involvement who obviously want to see Westerners treated like VIPs. 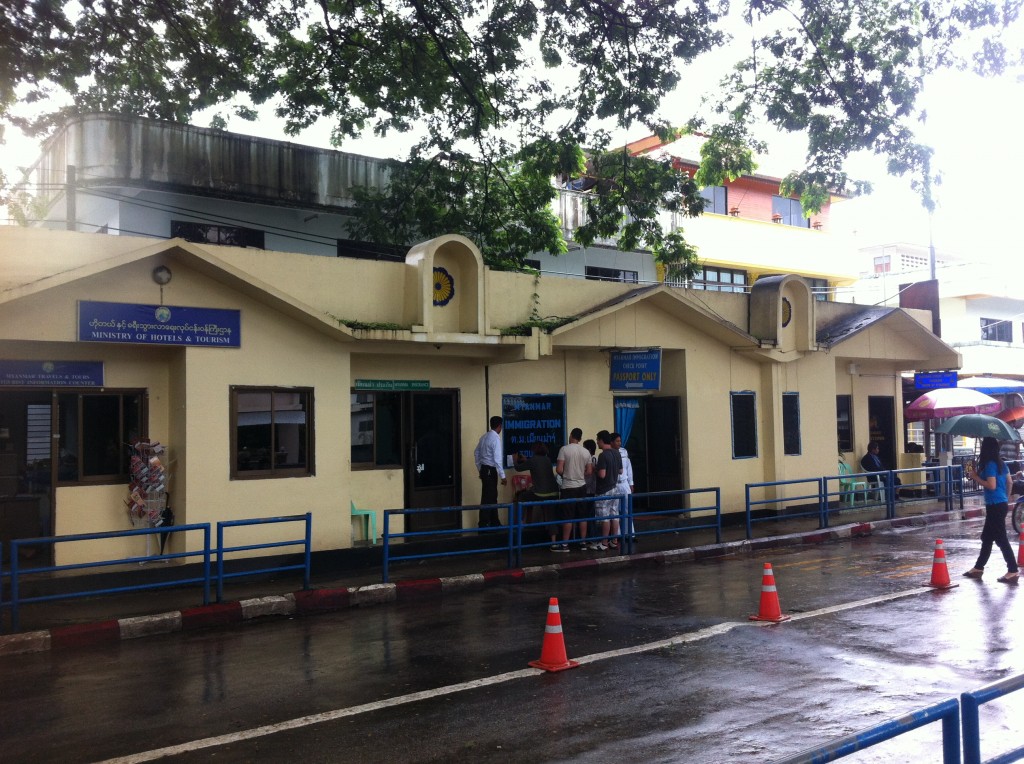 I was walked into an office, where they made a picture of me, they took my passport and in its place I received a temporary passport. 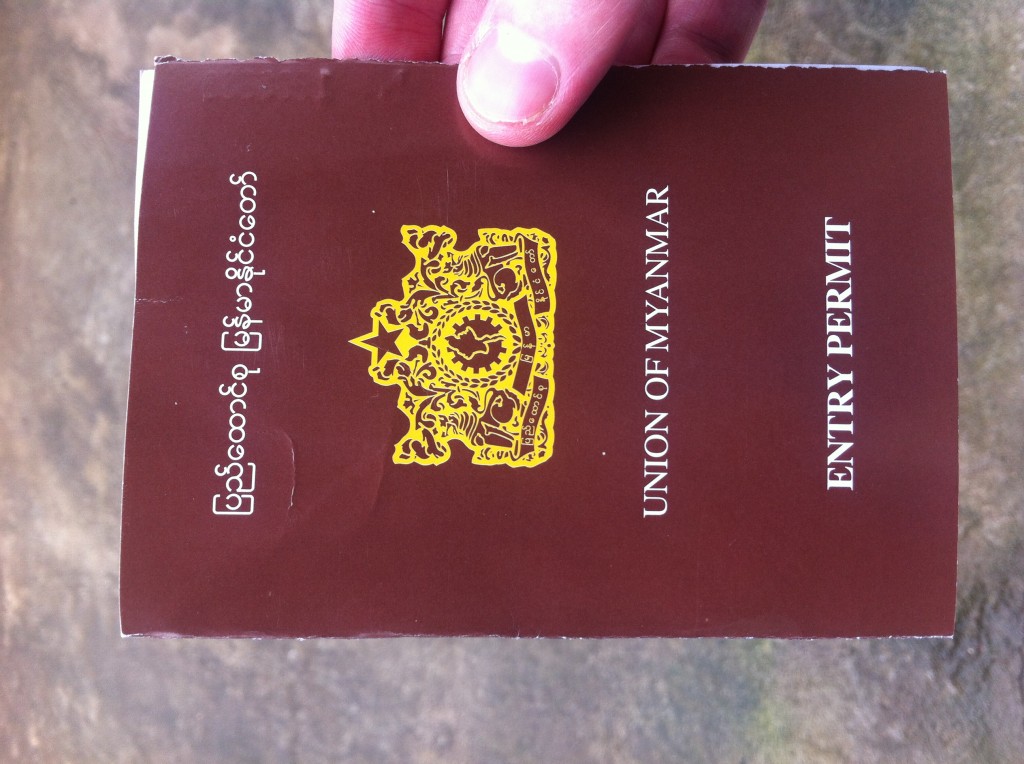 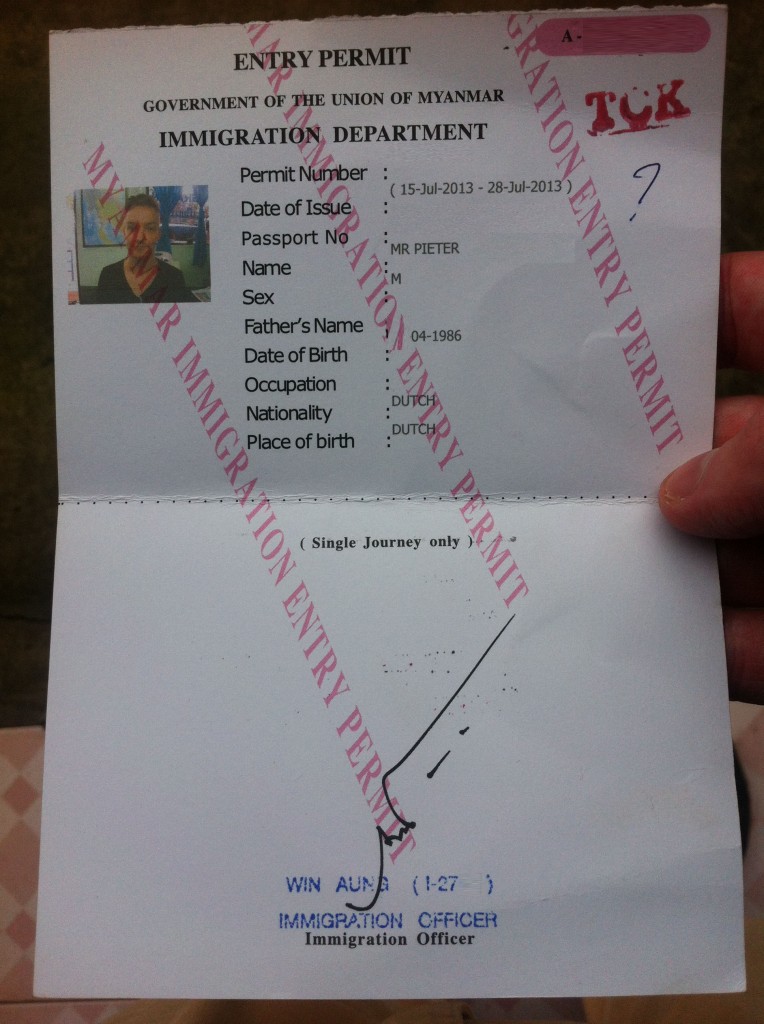 When they asked what time I would come back into Thailand today, I said I wanted to stay for at least a day in Myanmar. It seems everybody in the office was stunned that someone, let alone a Westerner, would want to stay here. And for a moment there I could see a simmering happiness in their eyes that I may have been one of the first new tourists to Myanmar’s border town Tachileik. Or so I wanted to believe. 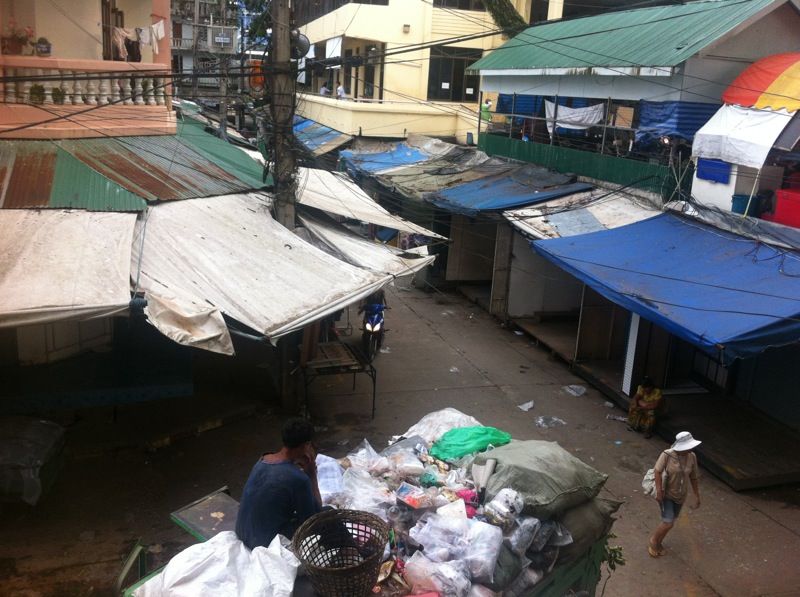 Walking into Tachileik, there was Burmese sitting on the side of the roads observing everyone coming in. Being used to smiling at everyone I see in Thailand, my smiling was not returned by a single person. Obviously, I know I’m a walking cliche. The completely naive white male smiling at everybody expecting it in return. But somehow smiling works to clear up the vibe everywhere in the world. Well, not in Tachileik. I walked on and arrived at a big roundabout. 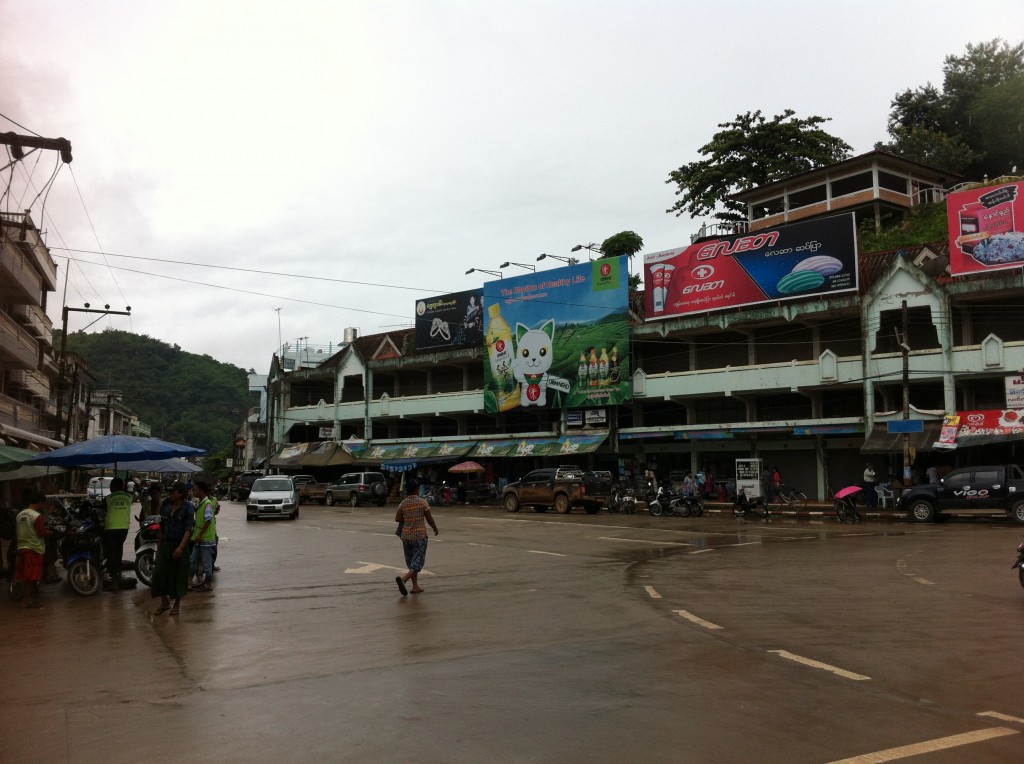 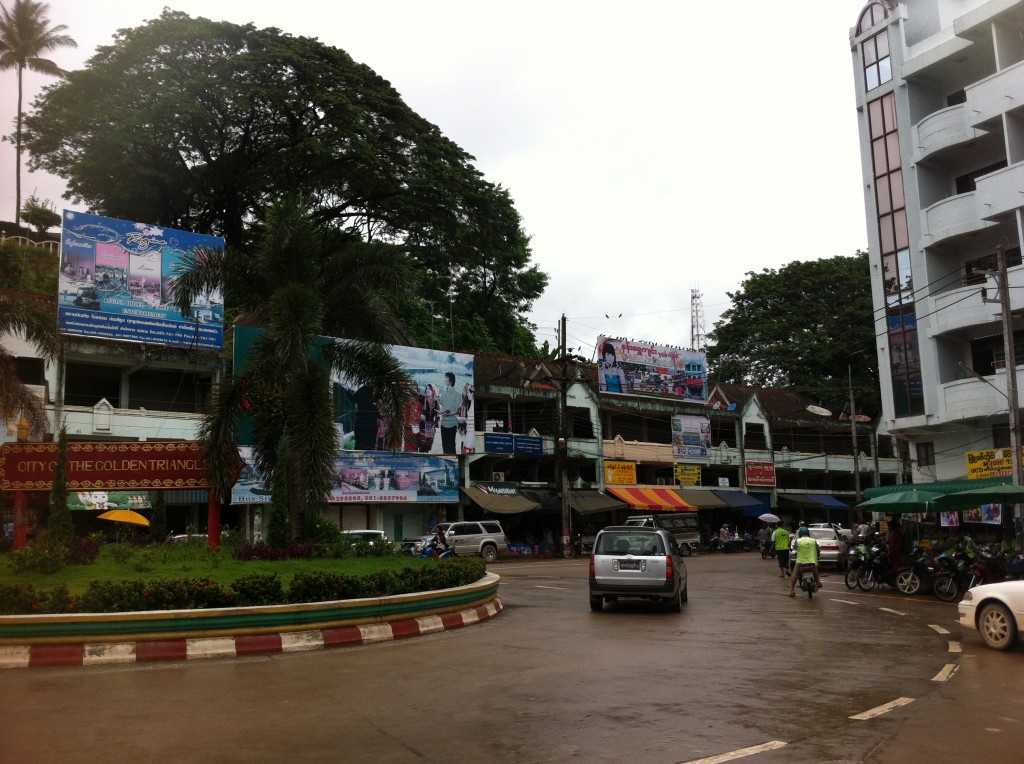 This seemed like an adventure game. Left or right? I chose right but there wasn’t much of anything here. It was just a dusty road with weird Burmese shops. There was literally nada tourist development here. Which I like. But I never saw it this dire. And it made me wonder how I was going to complete this mission of staying here for a day.

I kept walking but there wasn’t even any hotels I could see. I had a backup in case I wouldn’t find a place to stay, which was a screenshot of WikiTravel’s Tachileik page: 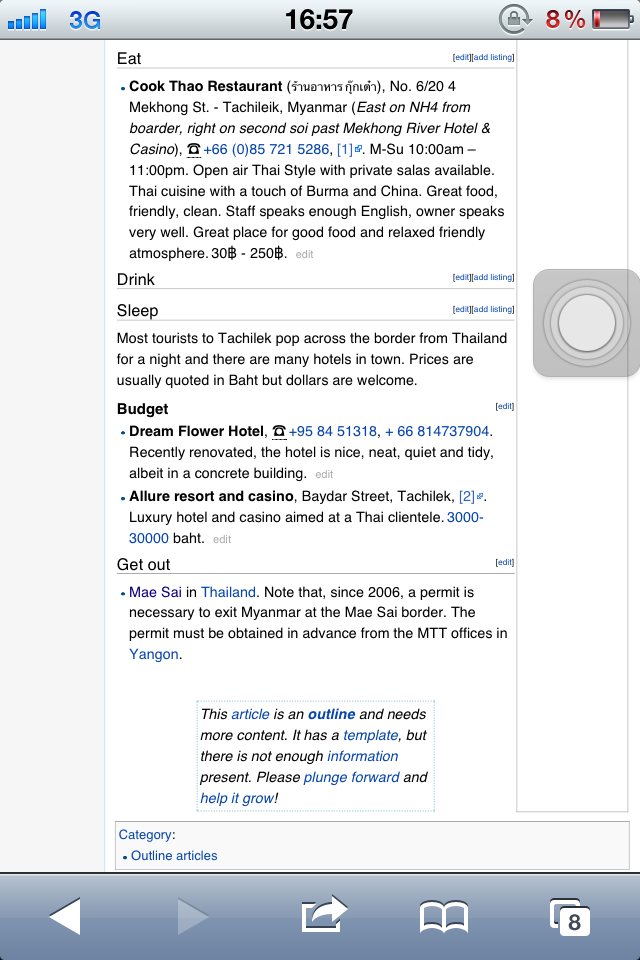 I asked a motorcycle driver to bring me to Dream Flower Hotel. Arriving there, the hotel wasn’t there anymore. I was fucked. I asked the driver to bring me to another hotel, but everything seemed closed down. Who even stayed here except for smugglers and Chinese traders? Finally I found a place and met some real Burmese people. They had white stuff all over their face, and it looked like all women had a collectively bad case of acne they were trying to cover up. But heu-heu-heu, I saw right through that! 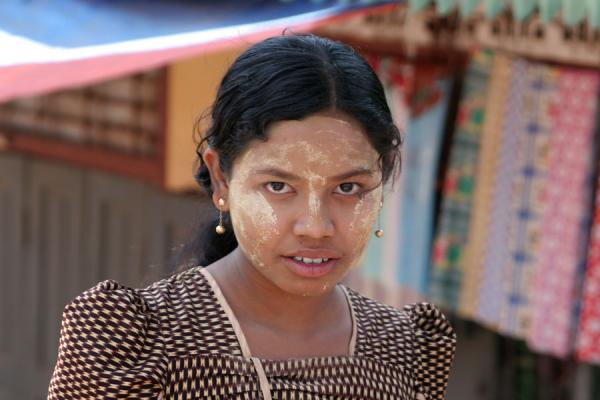 Obviously, it was some cultural thing where they think it protects their skin from the sun. I think otherwise. Meanwhile, the girls with white powder on their face working at the hotel were laughing at me as I was the first westerner they had seen here in awhile. They probably were just as surprised as me why any westerner would want to stay in Tachileik of all places. For reasons…of…random…adventure? They all looked fascinating, like their faces look completely different from Thai or anything I’ve seen in Asia. Their faces are bigger and rounder and those eyes. They have eyes you can dive in to. They have this different look in their eyes. I’m confident I wasn’t projecting this but that it was actually true. This is what decades of surpression might to do to people, their eyes just look different in the way they look at you. I saw the same, albeit a lot less, with Cambodians.

Arriving in my fan-less room without air-conditioning, I looked outside and asked myself what the fuck I was doing here. 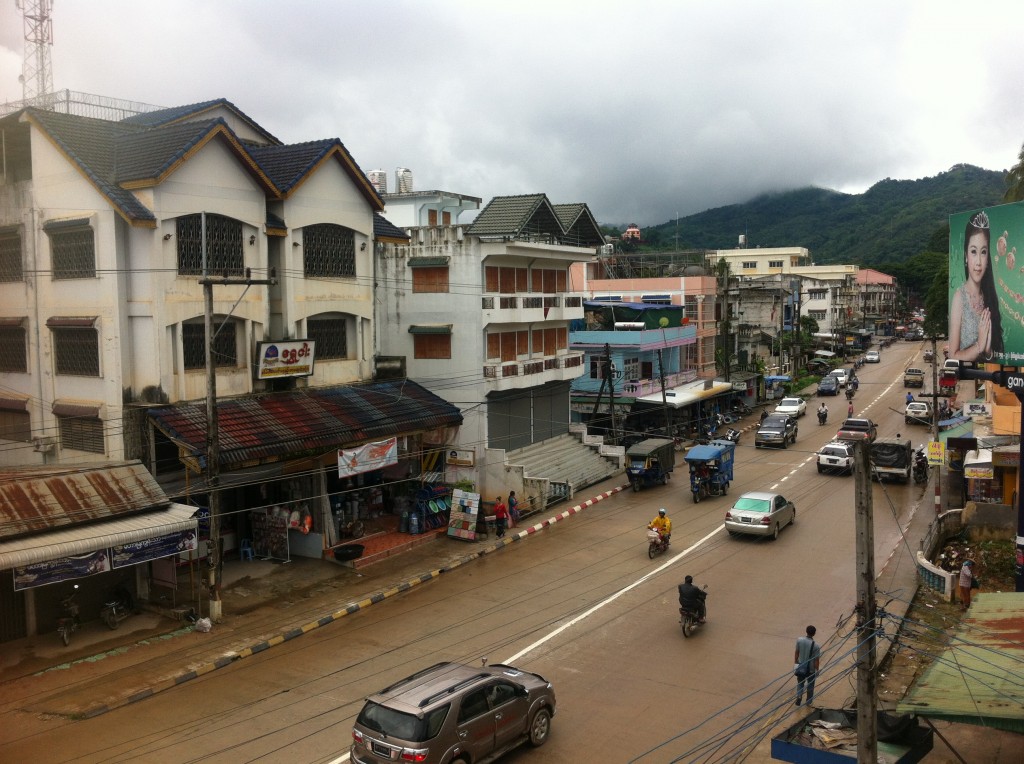 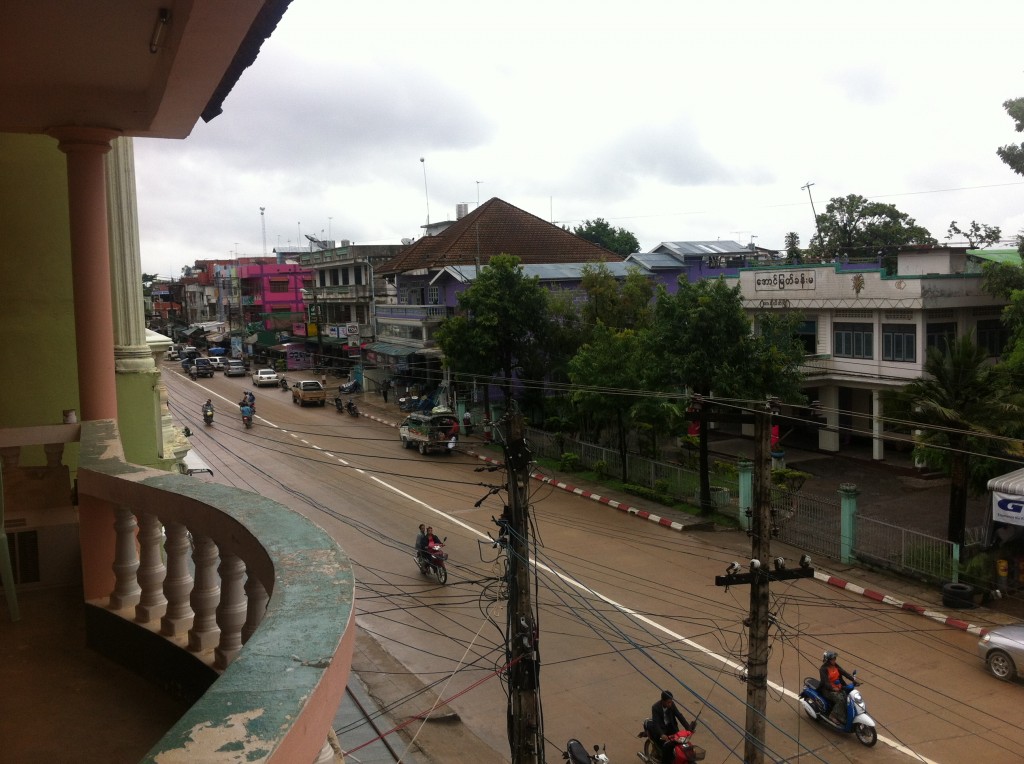 As the day progressed into night, I explored the city a little bit and tried to find some food. It was obvious that this was a trading city, as most buildings you see in the streets are traditional warehouses with open floors with the owner’s wares stacked to the ceiling. 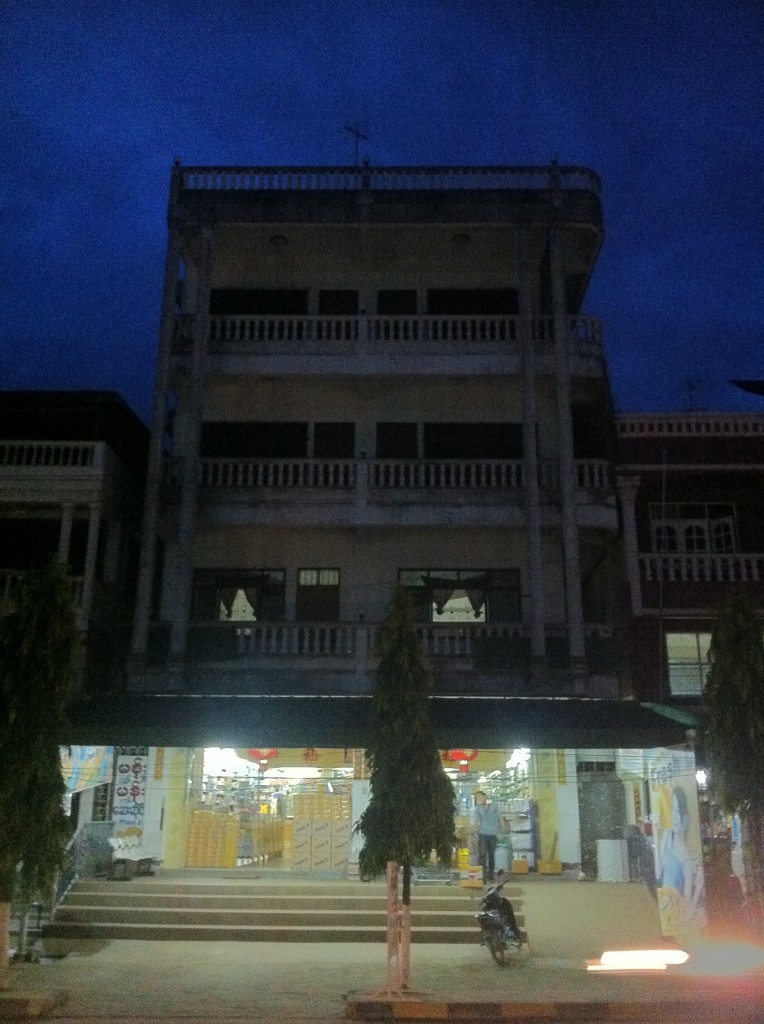 There actually wasn’t much else. Also there was none of the daily luxuries that Thailand had. There were no 7-Elevens anywhere. After much searching, I finally found something that looked a little bit like a supermarket. Well it felt more like a supermarket from 1930. I also found a barbershop. Yup. Also looked liked it was from 1930. 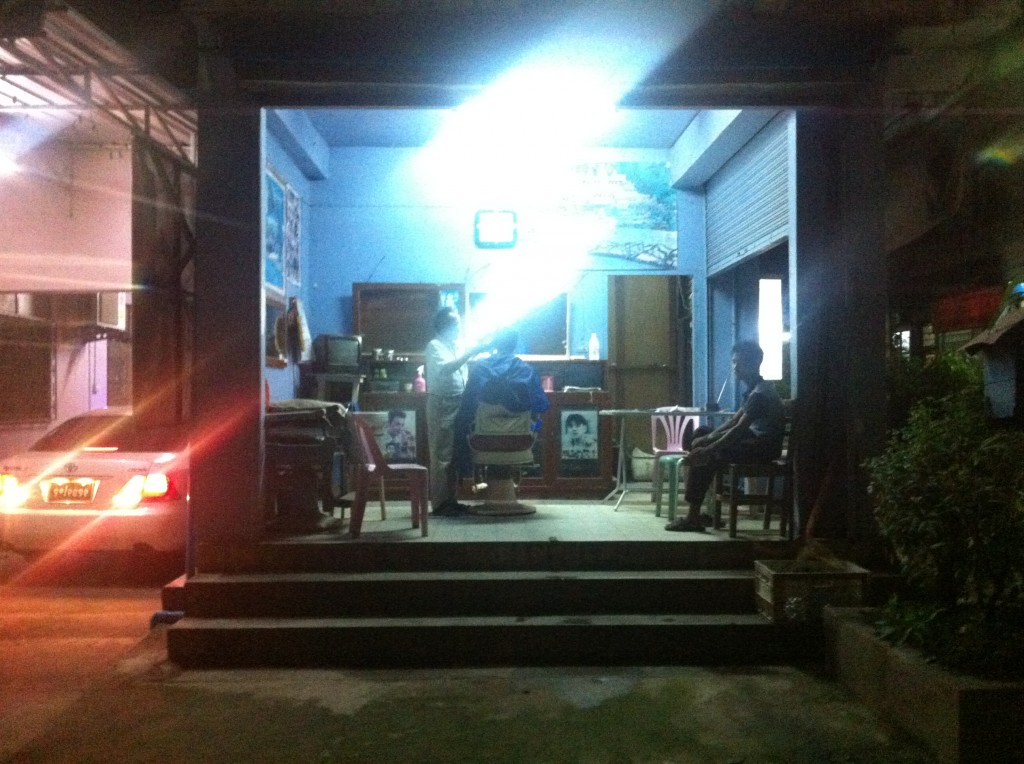 In the end, I couldn’t find any food I could trust, so I ate freshly made pancakes on the street instead. There was literally nothing here in Tachileik. I was on the main road, and the more I walked into the country, the less there was. It was one big fucking mess. It’s no miracle this a drug smuggler’s heaven, as it felt like a wild west town. I stayed for one night, and then left back into Thailand.

In the end, I actually liked it here, it was refreshing to be somewhere completely non-touristic and weird. And this was as weird as you could get. For me, travel should not necessarily be fun. I like it most when it makes me feel alive and like I’m walking on another planet. And Tachileik was definitely that. 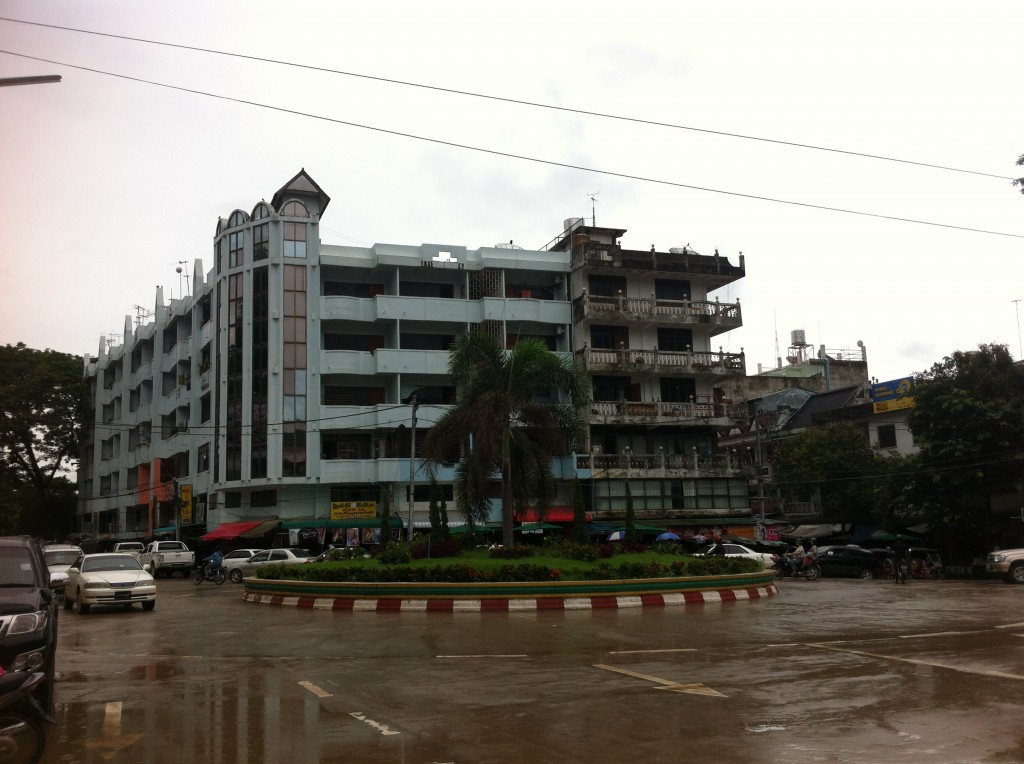 Thankful for the short adventure I had here, I was glad to walk back towards the Thai border crossing. In front of me was a British retiree of 60-something, living in Thailand and here on a visa run. The Thai official told him his documents weren’t in order. He needed a stamp. He didn’t get it and I tried to get in the middle to help him out. He was missing the stamp showing that he had entered Myanmar. I told him if he wanted to return to Thailand, he was supposed to actually enter Myanmar, even if just for a few seconds, to get his passport stamped.

Startled by my statement and staring at me and the Thai border official with his eyes wide open and struck by fear, he shouted in a thick British accent “Bloody hell I ain’t gettin’ in there, anything could happen to ya mate, it’s a fucking no man’s land out there!”.

I smiled as today it was someone else’s turn to be Panic Pete.

Back in Chiang Mai, I decided to live in a hotel for 2 months »