How I built Nomad Jobs, a remote job board for 100% distributed startups

A few months ago, I set a goal to launch 12 startups in 12 months. They’re all minimum viable products, built to test a hypothesis and see if they can get a market fit in a month.

They’ve all been doing relatively well. 1) PlayMyInbox got covered by MTV and Lifehacker, 2) Tubelytics was quickly adopted by some big media brands, 3) GoFuckingDoIt went completely viral and was featured all over the media including TheNextWeb, AppSumo and WIRED and 4) Nomad List surpassed all of the previous hitting #1 on Product Hunt and Hacker News and getting covered by Business Insider, Inc.com.

There’s something in the air. The attention Nomad List got was insane and to me shows that we’re in the middle of an gigantic social trend towards remote working internationally.

I love seeing this movement unfold and I want to solve the problems in it. It’s fun in two ways, if you can solve problems here, it can be a catalyst to the evolution of this movement. And if you do it well, it’ll make you money too.

The first problem I solved was with Nomad List, answering the question where you should relocate to. The second problem I want to solve is how to actually make people be able to go remote. If they still have a job tied to an office that won’t happen.

That means we need a job board for digital nomads. Since Nomad List already received so much exposure to its brand, I wanted to re-use its logo to build Nomad Jobs.

I used the same simple list-based layout for the jobs page with each item featuring the company’s logo, name, position and tech stack: 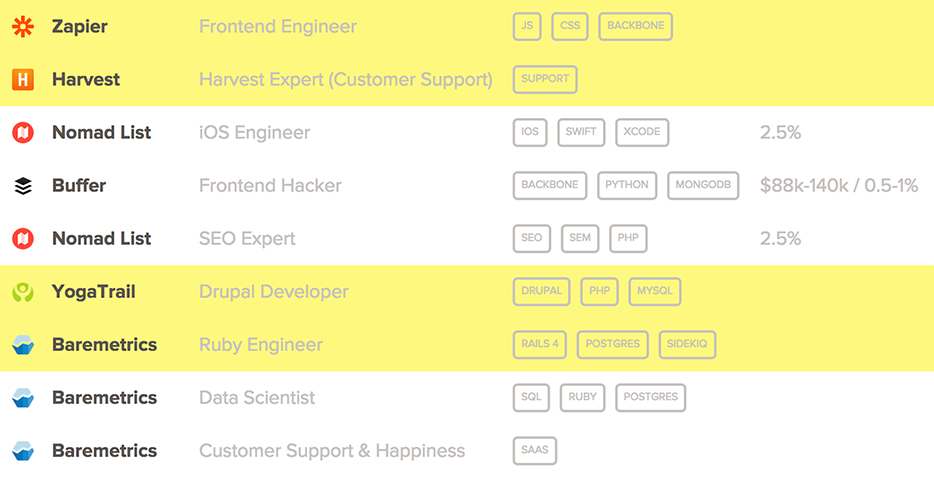 The yellow color is there for highlighted ads where companies pay $50 extra. I got that trick from other job boards.

I also added the expand functionality. When you click a job, you can quickly read its details:

I first simply added a big button for people to post a job which was actually just a mailto: link to send a message to my email:

To make sure I didn’t launch with an empty list, I pre-seeded it with jobs from remote startups where I knew people already. I contacted Buffer, Sqwiggle, Zapier and Baremetrics to ask if I could post their jobs. They all obliged and were happy to participate: 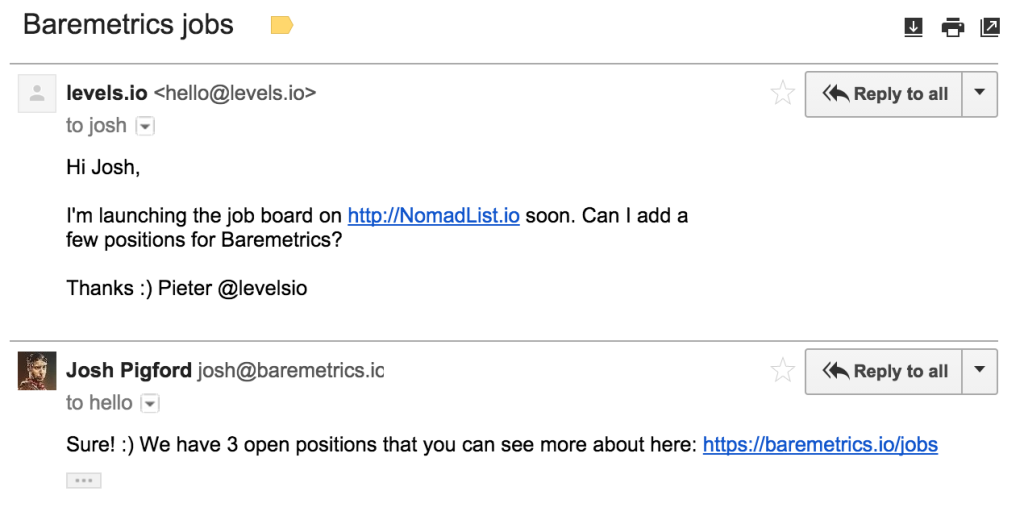 I had an unfair advantage that I already had an audience I could push this to. So I automatically cross posted a random ad on each page load on the front page of Nomad List, between the city listings:

I also tweeted them out with an image like this: 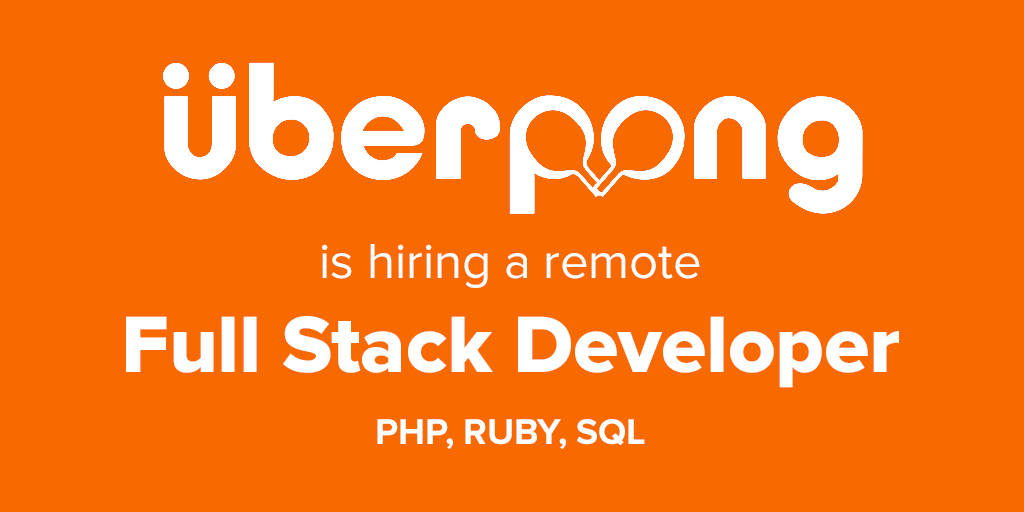 And after a few weeks I managed to reach page 2 of Google already, not good enough but getting there: 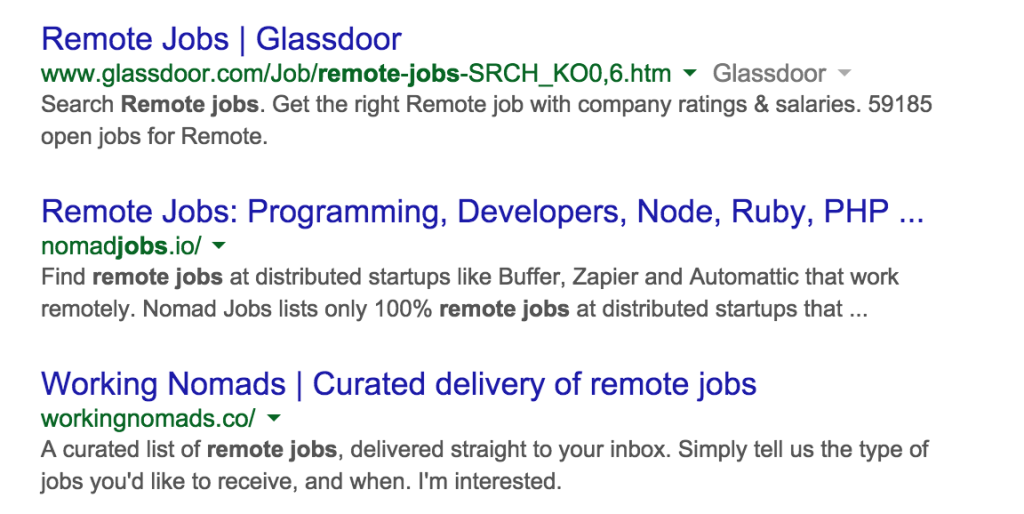 Then I started getting the first job submissions by email: 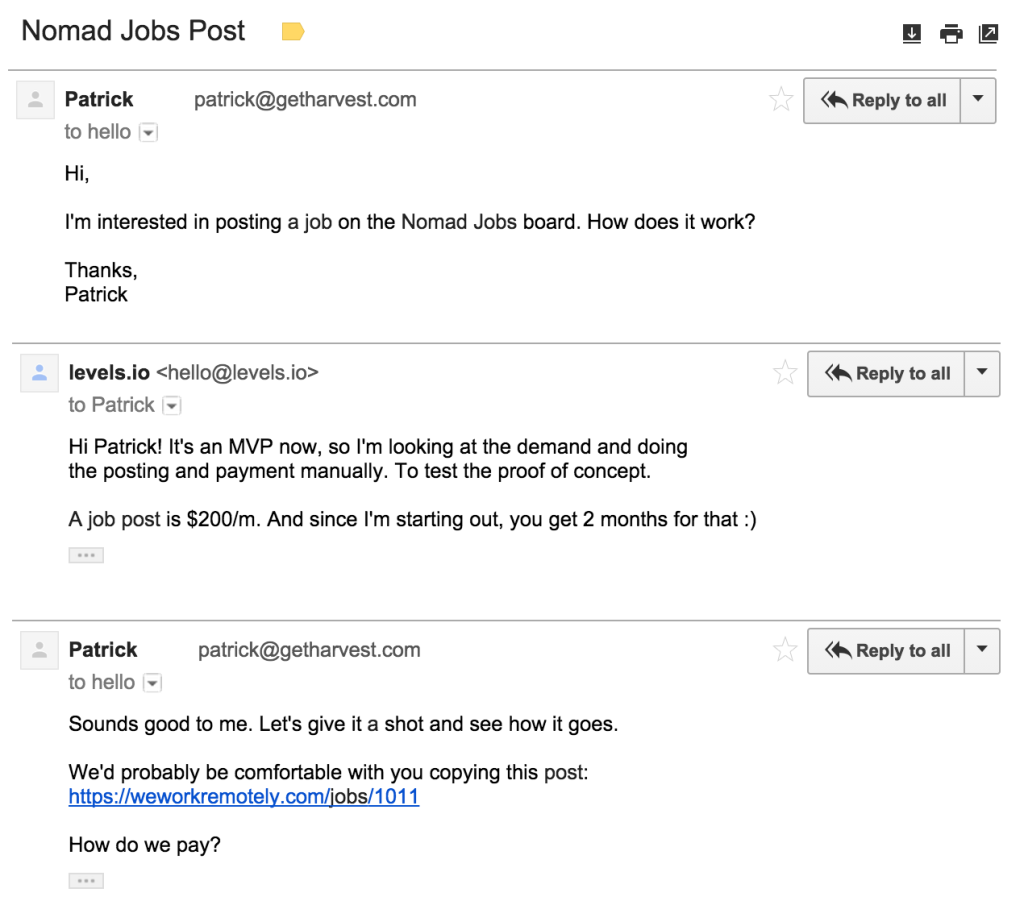 After a few weeks, adding jobs manually became an ordeal, so I made the job submission process automated using a Typeform with payment. The jobs page then pulls the new jobs straight from the Typeform’s API and adds them to the website. Payment is $200/m with discounts for longer terms.

Technically this was super trivial, but the real challenge here lies in growing an audience to make a job board work. And then connecting that to companies who need people. I’ll see if I can make that happen in the coming months.

Getting people access to jobs they can do anywhere is part of my “propel the nomadic revolution” master plan, and it’s an essential one. Besides that, jobs are always a great source of revenue. The recruitment market is huge. Helping companies get the right people to do their work will always be a valuable offering. And doing that for remote work seems like a pretty obvious market need to me.

Let’s see how this goes! Try it yourself at http://nomadjobs.io