Stripe launches beta in the Netherlands

I could not think of an email making me happier than when I found this message from Stripe in my inbox today. 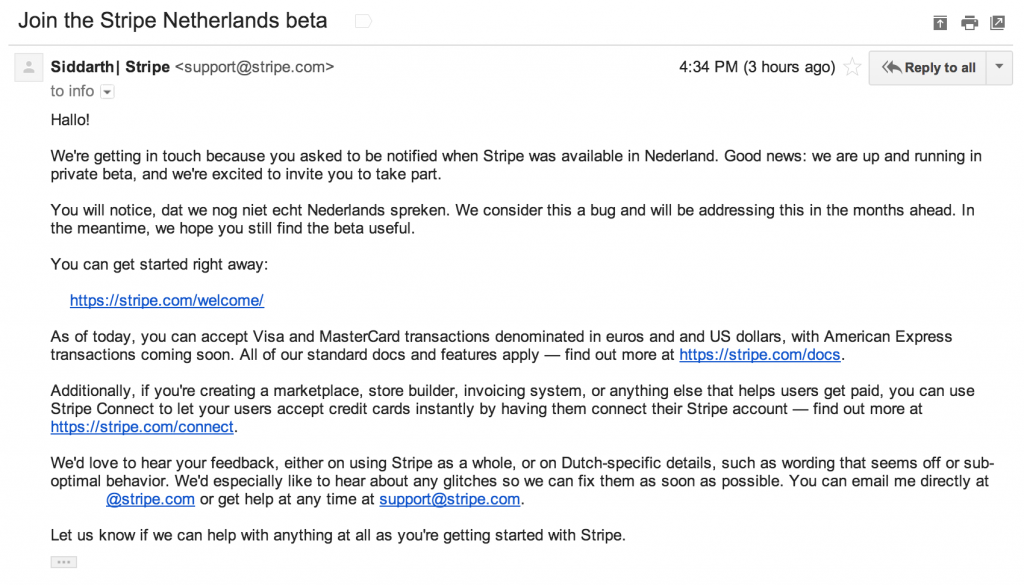 I was literally jumping of joy.

I was struggling for weeks to choose which payment processor to use for my new SaaS product and it was delaying my entire launch. Every service I tried requested a huge amount of paper work (even the German copy-cat Paymill and Braintree had endless amounts of forms I had to fill out). Stripe took less than a minute to fill out.

I knew all the Americans and British (where Stripe is already operational) on Hacker News praised the implementation of Stripe’s payment API, but since I was never able to try it I was quite curious. I had already implemented the PayPal API years ago and that took a few days, well, it literally took me 5 minutes to set Stripe up and get it working. I was flabbergasted.

It’s as simple as adding a few “data-stripe” elements to your form inputs (so that Stripe can find the credit card details in your form) and including the stripe.js in your page. When the user submits the form, the credit card details are then sent to Stripe’s servers, and you receive a token that represents the user’s payment details. You sent this token along with the rest of your form data to your own server and store it. You never see, touch or store any of your customer’s credit card data (only a token representing them) and that’s how it should be because I wouldn’t trust myself to know enough about security to store credit card data anyway.

I am in love with Stripe already.

P.S. thanks Stripe that I can take part it your beta! If you’re in another country that’s not operational yet, register your email now at Stripe Global so you’ll have early access when it happens!

Oversight: Thank You For Volunteering, Citizen