After finding places to work in Bangkok, I wanted to have some fun during Bangkok’s nightly hours. So on Saturday, I met up with Jasmine, who is an American from California and teaches in Bangkok. She showed me the hip places to have drinks at in Bangkok near Nana BTS station. 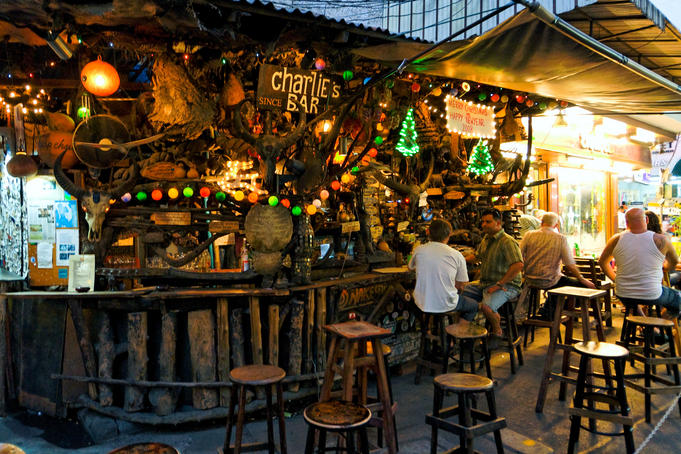 We first went to Cheap Charlie’s which is one of the most famous expat dive bars in Bangkok. The term “dive bar” I learned in San Francisco to mean something like super cheap and slightly dodgy. Cheap Charlie’s is definitely cheap but not so dodgy. It’s tiny, completely open-air and features a piratey-looking decor with the skull of the deceased owner of the place, Charlie, hanging above the bar (or that’s the story).

Next was one of the best places I’ve ever been to I think: Above 11. It’s funny because when I lived in Amsterdam we used to visit a top-floor bar called Club 11. But that one got demolished.

This place is actually above the top-floor, it is on the roof. And it’s amazing, just look at this: 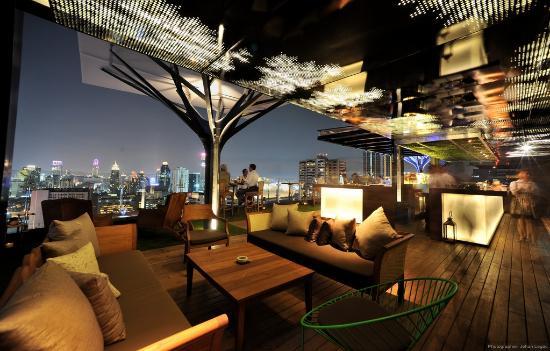 Cheap beers, cheap food and a ridiculously crazy view over the glowing and flickering skyline of Bangkok city.

It was already past midnight and after having some drinks, I spotted a roof-top pool just on another skyscraper near to us. I quickly made it my life’s objective to try and crash that pool. We went downstairs to the street and tried to walk and find the skyscraper it was in. It turned out be a club/hotel and so we blagged ourself in. We entered the elevator but we needed a card to get up! Standing there like two innocent kids in an elevator that was never going to move, a hotel staff member came in and asked what the hell we thought were doing. Seeing our luck quickly dissipate, I bursted out we were from room 205 and our card was still in there. The staff member apologized, smiled and quickly used his card to activate the elevator for us. Yessss! We pushed the top-level floor and after a minute we were at the pool we were going to crash. 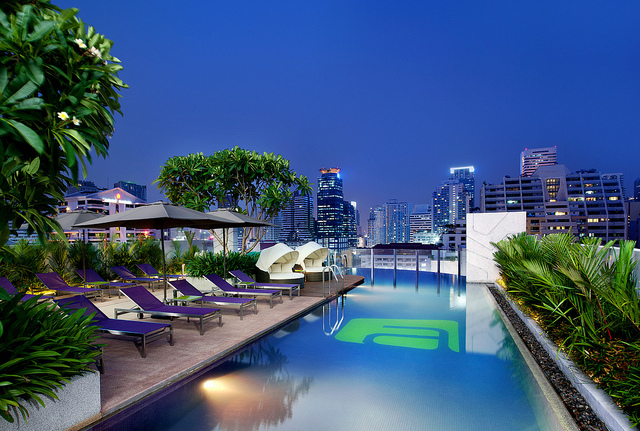 But were we? We were near. So near. But the glass door to the outside was locked. The pool closed just minutes before at midnight. So close, yet so far away. I could cry.

If I can’t swim here, I’ll just go to an island and swim there instead »