It's practically impossible for regular people to buy Bitcoin

We’re in the middle of a huge Bitcoin bubble resembling Tulip mania. There’s now huge demand in the mainstream to buy bitcoin for speculation mainly due to media attention. There’s one big reason why we haven’t seen Bitcoin’s price peak yet though, which user Aardwolf on Hacker News states clearly:

How to actually get bitcoins?

I mean, seriously, I tried, but all my attempts were futile.

Why can’t I just use a credit card or similar and buy bitcoints?

Back when they were $100, I really wanted to buy a bitcoin, spent half a day on it, but didn’t manage to. I gave up everytime I needed to do something strange involving permissions with my bank.

Is there an easier way to get them? I live in Europe by the way.

In 2012, I bought my first bitcoins through MtGox. Back then it was the only exchange supporting European wire transfers (SEPA). A year later, many of my regular non-tech friends are now getting into bitcoin. But the common theme is that it’s almost impossible to actually acquire them. They’ve spent weeks trying and only half of them now have been able to buy them.

First of all, it’s really difficult to find out how to buy them. Secondly, when you find out how (by using exchanges like MtGox, Bitstamp or BTC-E), you need to get verified. Being verified means uploading a copy of your passport and utility bill. But verification can take weeks or months and the odds of getting accepted are actually low. Seeing my friends get denied every time, I couldn’t believe it was so hard. So I decided to give it a try myself. I signed up for Bitstamp 3 weeks ago. I’ve now opened three different accounts, that have all been denied. My documents (passport and utility bill) are all in order (high-res scans, clearly lit and official) and are the same ones I used to get verified on MtGox a year ago. 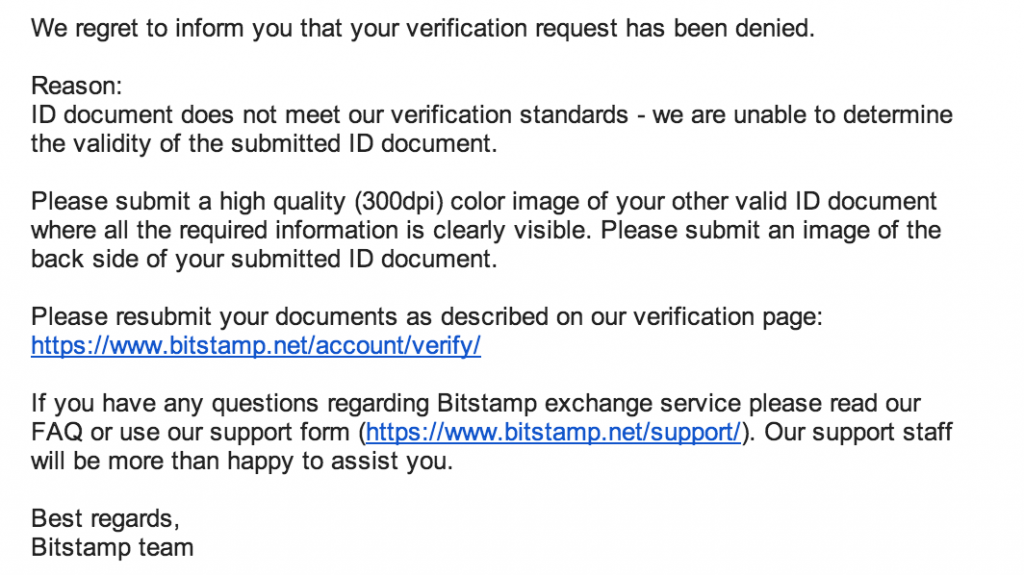 I then tried Bitcoin.de which took a week to verify and then they told me they didn’t actually accept SEPA deposits.

All in all, it just takes a long time to buy bitcoins for regular people, if they can get them at all. Especially if you’re outside the U.S. (like most of the world) and cannot use services like Coinbase.

Why is this a problem?

For good reason, people should be more interested in the actual adoption of bitcoin and its usage in payments, rather than just speculation. But speculation is a great opportunity to get a lot of mainstream people INTO owning Bitcoin in the first place. Which they then can start spending later. So when they can’t actually buy bitcoin, they can’t speculate and later on they won’t be able to actually USE bitcoins for buying stuff and helping adoption of it as a regular means of payment.

What does this mean for the price?

The current price on MtGox at time of writing is an all-time-high of $1200. But there’s now huge mainstream demand that is not being answered due to the difficulty of acquiring bitcoins. If that demand doesn’t go away and exchanges are able to make it easier to acquire bitcoins in the next few months, it means the potential price of bitcoin can be much higher — as only a minority of people that want to own bitcoins actually currently own them. If the exchanges can not get their act together fast enough, regular people will simply get so frustrated and give up buying it altogether. And the price will go down.

And that’s not just bad for speculators, but also for bitcoin’s overall adoption.

Update: Some commenters on Hacker News are rightfully suggesting Coinbase. But they forget that Coinbase is US-only (and maybe Canada?), while Europe (that’s me) and the rest of the world (Asia, anyone?) also want a piece of the bitcoin pie.

Full disclosure: I own both BTC and LTC.