What I learnt from 100 days of shipping

About a year ago, I met @andreyazimov in Dojo, a coworking space in Bali. He wanted to make web products like me too. So I gave him some tips some time. I started a Telegram chat group with him and my brother, who was also learning web dev. Then more friends from Bali: @oskarth and @flowen_nl joined. Then I invited Marc: the founder of BetaList and a friend who I chat with about bootstrapping startups for the last few years.

The idea of this group was to help each other with technical issues while coding, but also to coach each other to ship more consistently. And it worked a bit. We would share our todo lists of the day or week, and check it off and update. Finishing your to-do list in a group made it more social but also more accountable. If someone wasn’t shipping for a few days, we’d ask “hey, what’s going on?”. Sometimes they were stuck on something and we could help each other get out of that.

Meanwhile for years, Marc had an idea to have makers (like me) log their updates. He tried it with changelog.co, which was great but it was too wieldy for me to go to the site and update every time I changed something. So it kinda died off (at least for me).

The two ideas of (1) a chat group for accountability and mutual help and (2) a public log of maker updates, magically merged when Marc started a Telegram chat group called “🚧 Work in Progress” (or WIP): 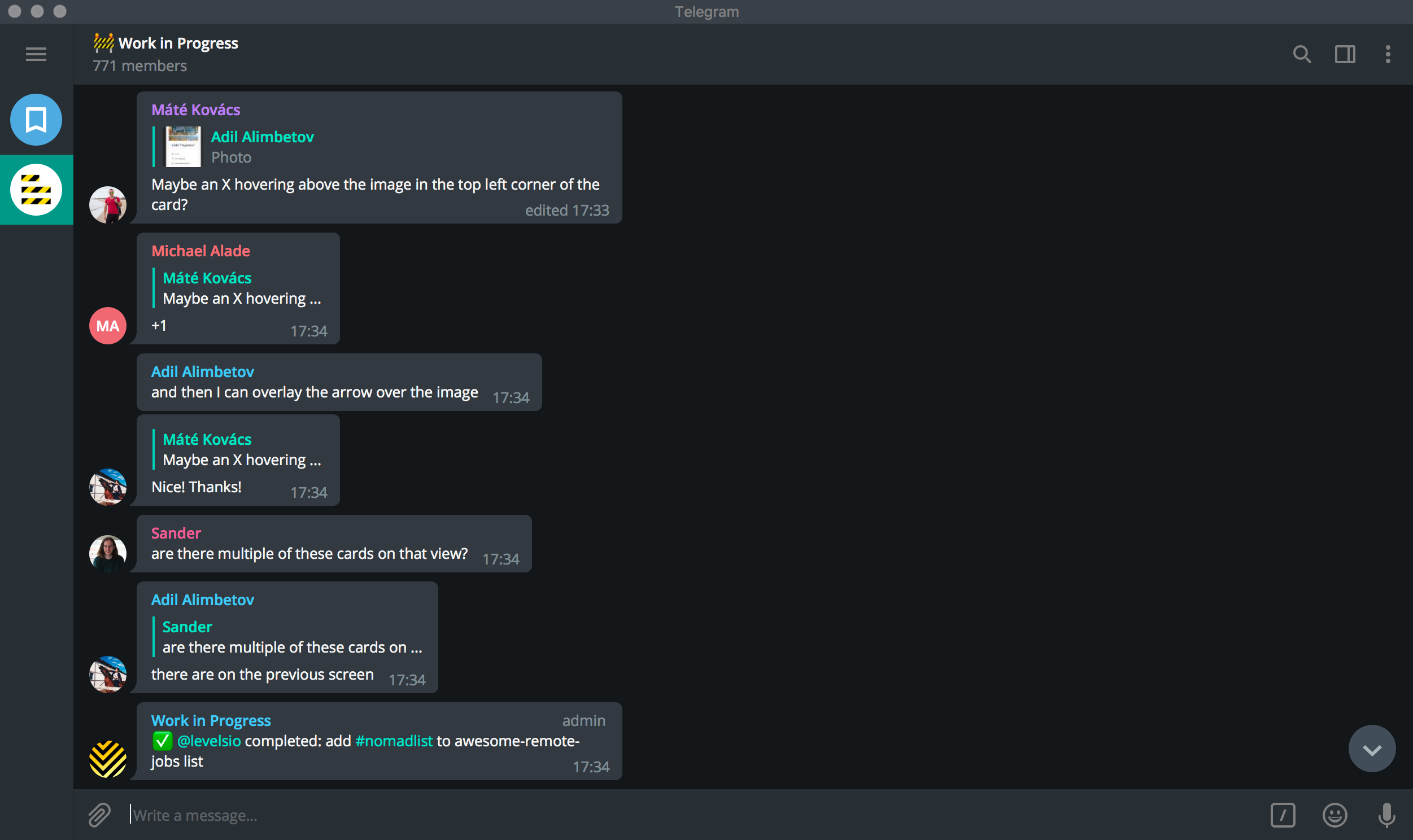 Besides helping each other, we’d log finishing our tasks by writing:

But nothing happened yet. Marc then wrote a bot for us called @wipbot: 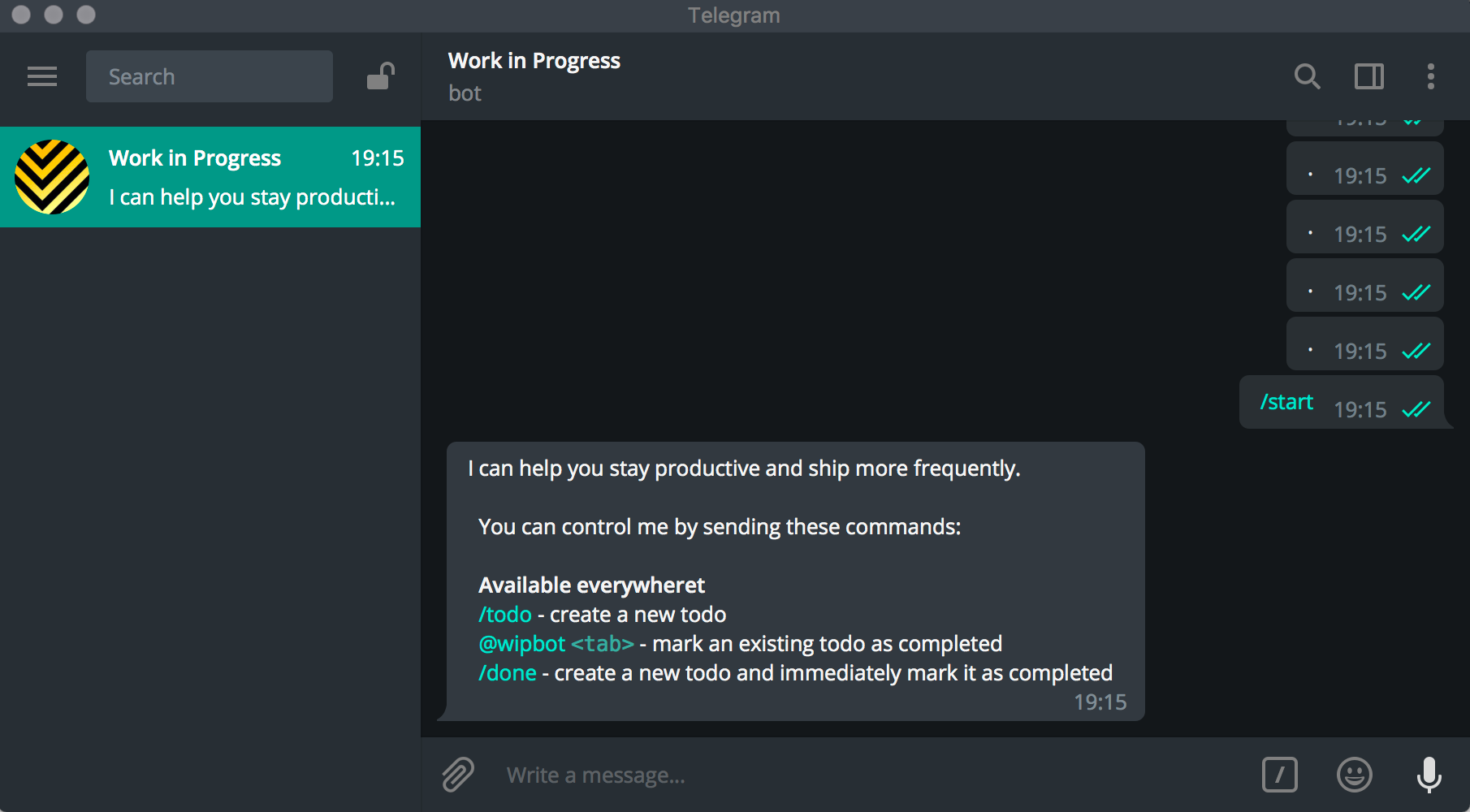 @wipbot saves our finished tasks we write on Telegram, but on a website called wip.chat:

And it has user profiles, to see what people are doing, publicly: 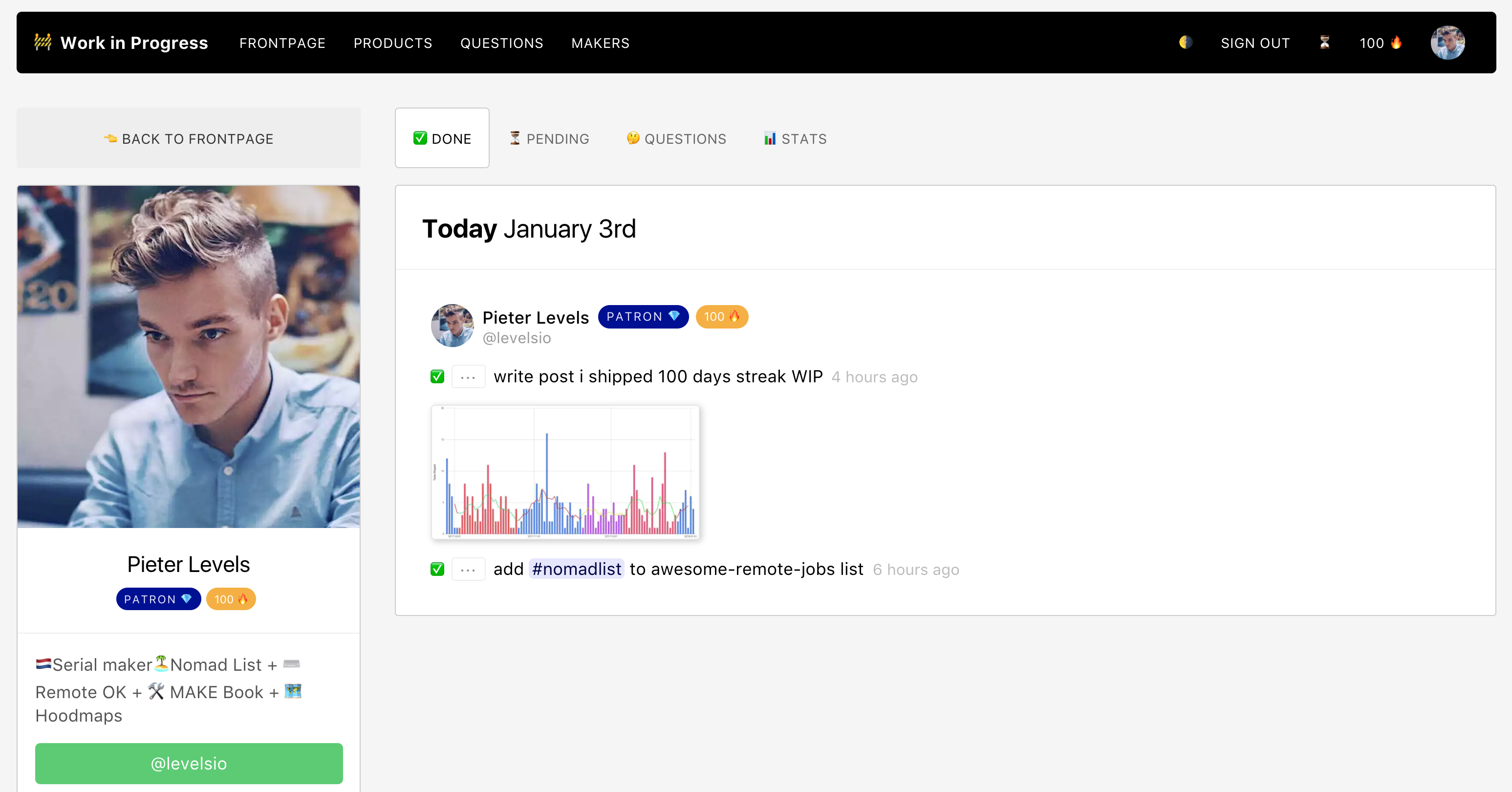 I now use it as my main to-do list. By writing @wipbot, I can see all my pending todo’s and tap one to complete it. Since Telegram works both on desktop and mobile, it’s always there to check what I have to do, and mark it as complete when I have. 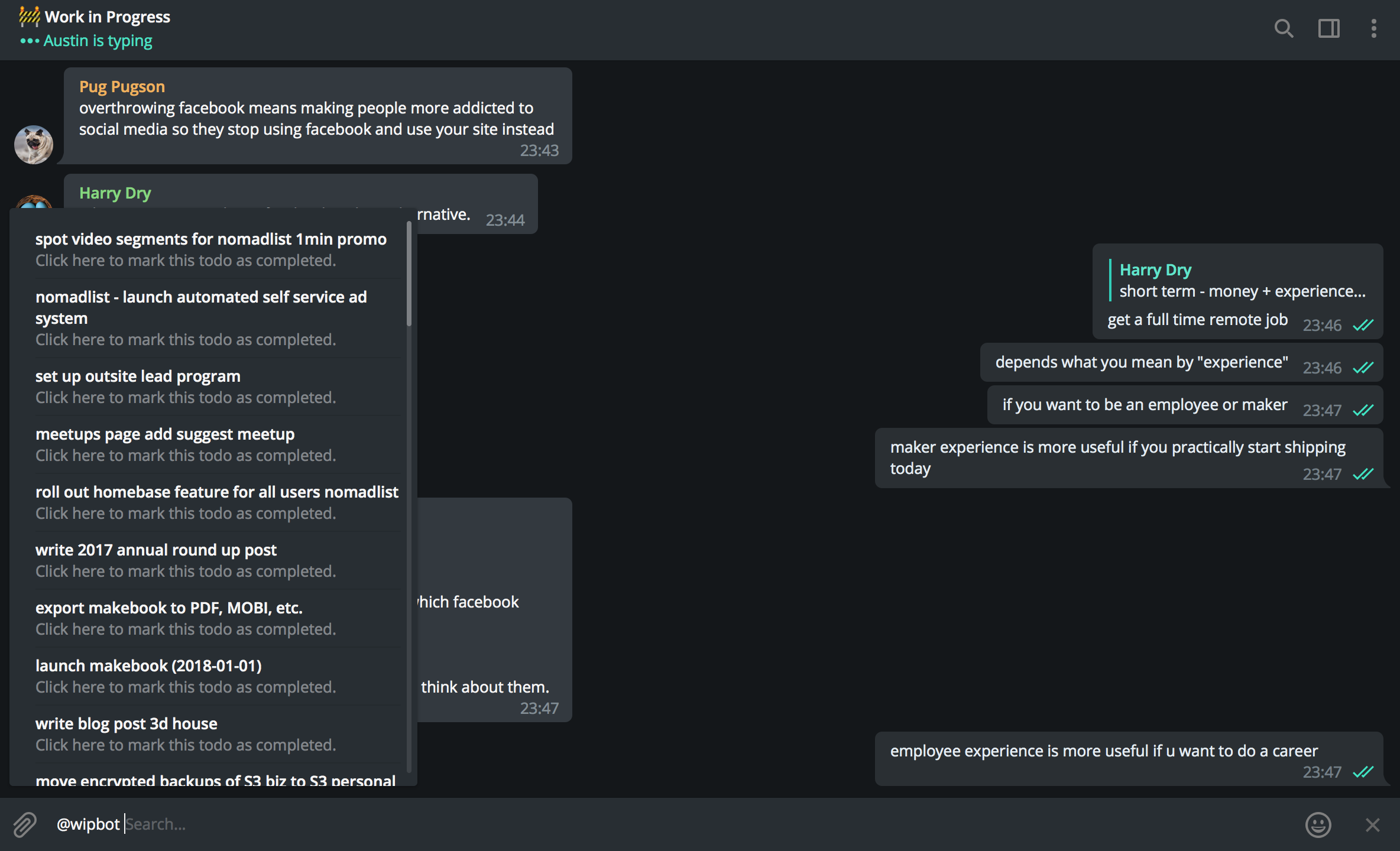 That was 3 months ago, and since then I can say that WIP has changed my life. There’s really only been 2 productivity workflows that ever worked in my life: my Post-It note system, and WIP. The idea is that I don’t even care about the tasks on my to-do list, I just want to complete a WIP task just for completing it.

Even more because WIP has streaks. If you ship 2 days in a row, you get a streak next to your avatar:

I was pretty productive before with my Post-It notes above (that was months ago), but many days I just didn’t ship at all. Now I ship at least one task, to keep my WIP streak, which generally means if I ship one, I’ll ship two cause I just force the flow. 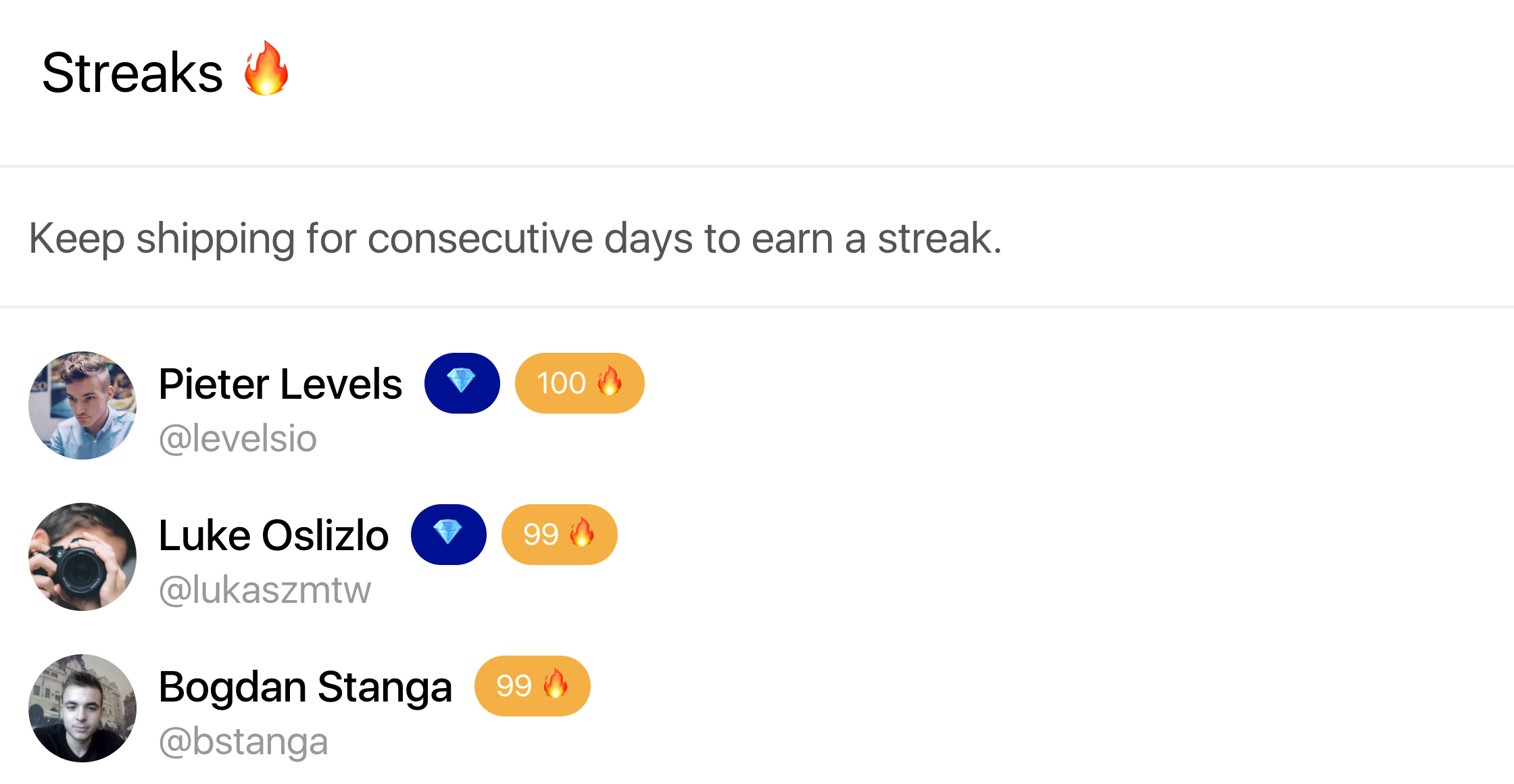 As vain, superficial and limited as this is (e.g. what defines an actual shipped task really?), it works. I’ve been more productive than before I used WIP. I’ve shipped 469 tasks in 100 days, an average of 4.69 task per day (doh):

I don’t really think in weekdays and weekends but still my best weekdays for shipping are ironically, the weekend. I think because I’m not distracted while other people are getting drunk 😛

Tl;DR, I have a more consistent flow of work than before WIP.

With the data from WIP, I’ve learnt about some trends in my workflow: 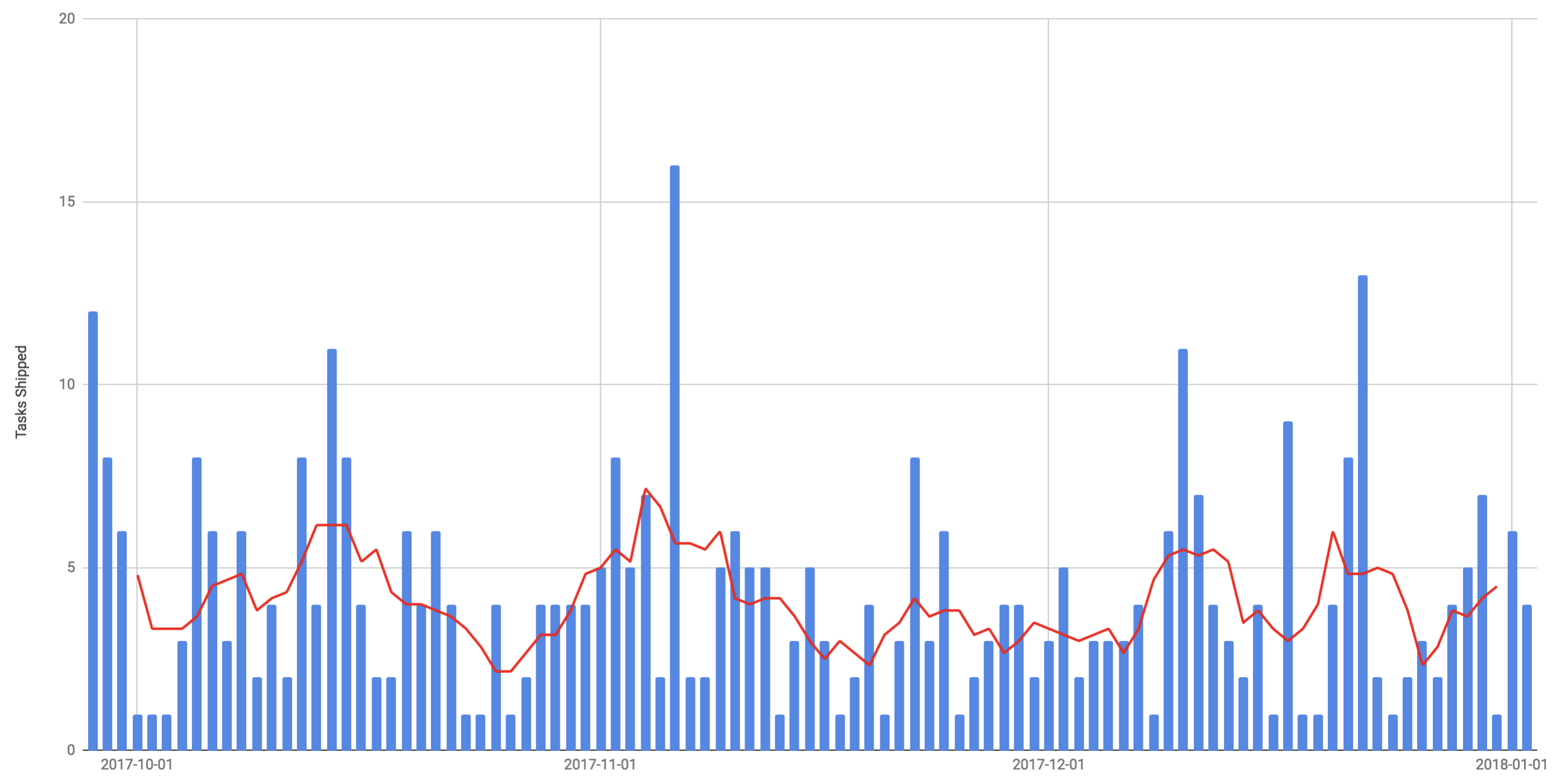 That period of me hardly shipping for 2 weeks around late November, early December? That was me flying to Bali, landing and acclimatizing to a new place.

Now I understand how destructive fast travel, e.g. going to a new place every week, can be for you. That’s why some people fairly say remote work doesn’t work for them, but they’re traveling too fast. According to this data I need 2 weeks to merely acclimatize. That means 2 weeks of lost productivity. I might still work for those 2 weeks, but I’m unable to actually get up the flow “hill” as I do before and after those 2 weeks! This also means unless I stay in a place for longer than 1 month, my “acclimatizing” downtime is over 50% of my time! That’s a lot! 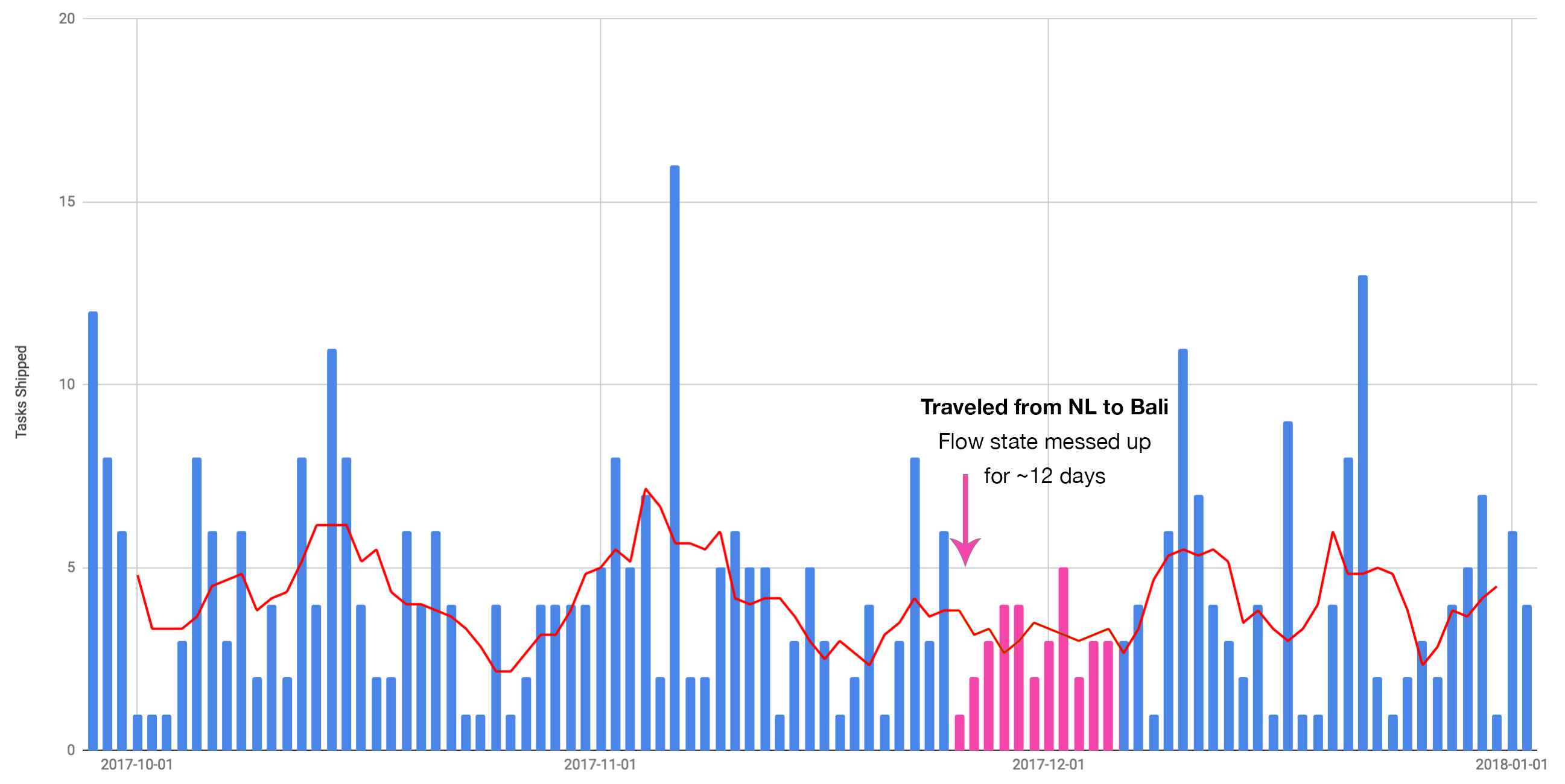 But it’s deeper than just missing 2 weeks. If you look at the chart there’s multiple flow periods, oddly specifically all being around 3 weeks. I will bottom at day 1 of 3 weeks, then peak at day 11 and slowly crash back down. Then I refuel, and I go back up again: 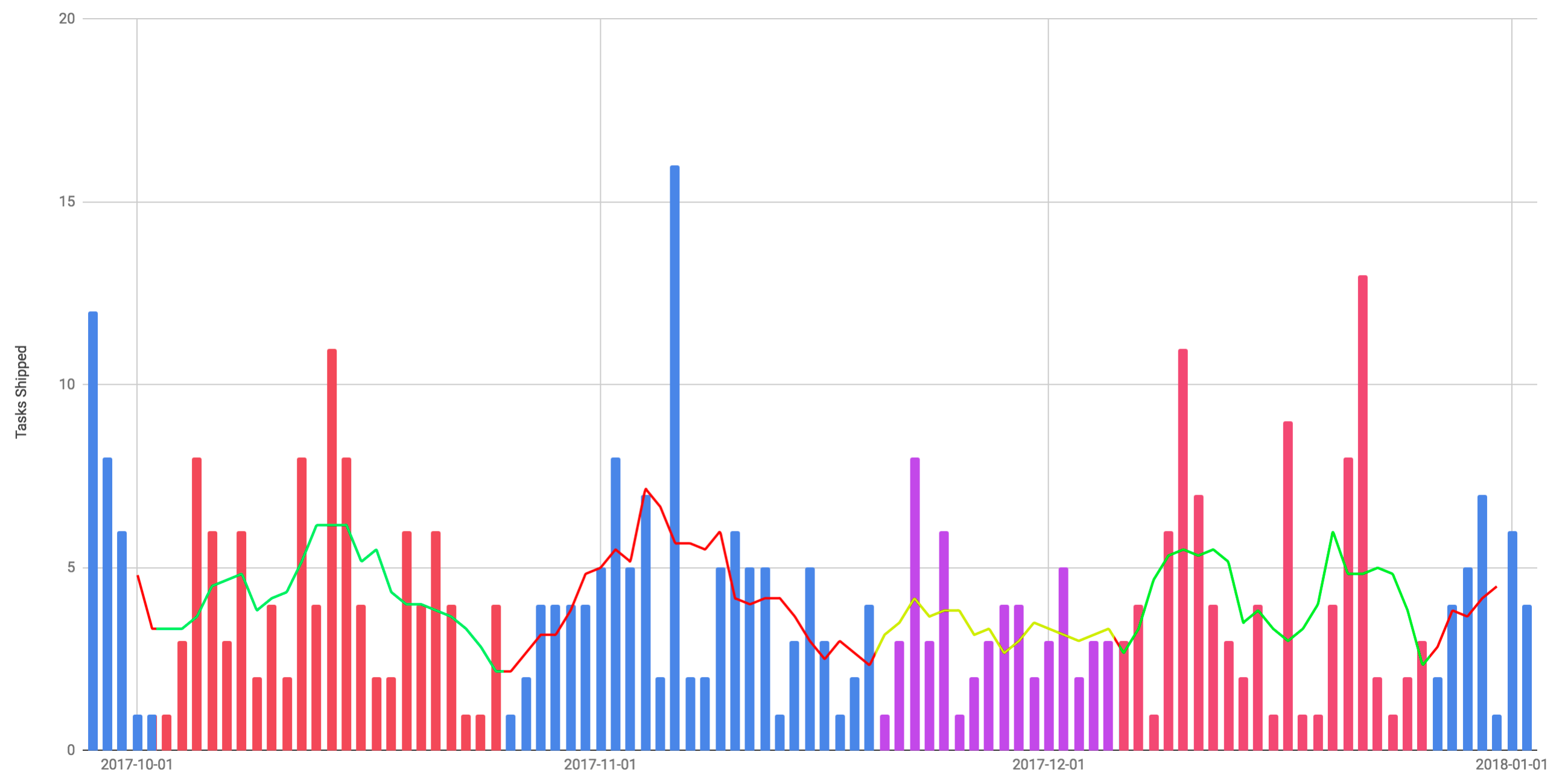 (Again, skip the purple part of travel in this chart fucking up my flow).

Where another to-do app is probably useless, social accountability seems to work well for productivity. It might help you ship more and if you log it, (like on WIP) teach you about the characteristics of your flow state over time.

If you see how destructive just one airplane flight can be for flow state, then there’s probably much more affecting it, like food, sleep and relationships. I have no data on that yet, but that might be interesting to study more later!

Just these charts instantly taught me a lot about my flow state. For me flow state is holy. If I’m not in flow I’m useless as a maker: I don’t have ideas, I’m not that excited to work. Flow state has left me for weeks, sometimes months, like when I got depressed. But if flow state works, it’s like reaching a higher level of consciousness: I’m hyper creative, productive, ambitious, my brain runs fast and makes original associations between ideas and I’m more confident so I ship with more conviction. And that becomes visible in the end product.

If you like to increase your productivity, but not with another to-do app. Try social accountability. Make a group. Work together! Either with WIP or your own friends group. It might work!

P.S. A hat tip to my fellow 100-streak record holders: @lukaszmtw and @bstanga, I made us awards: 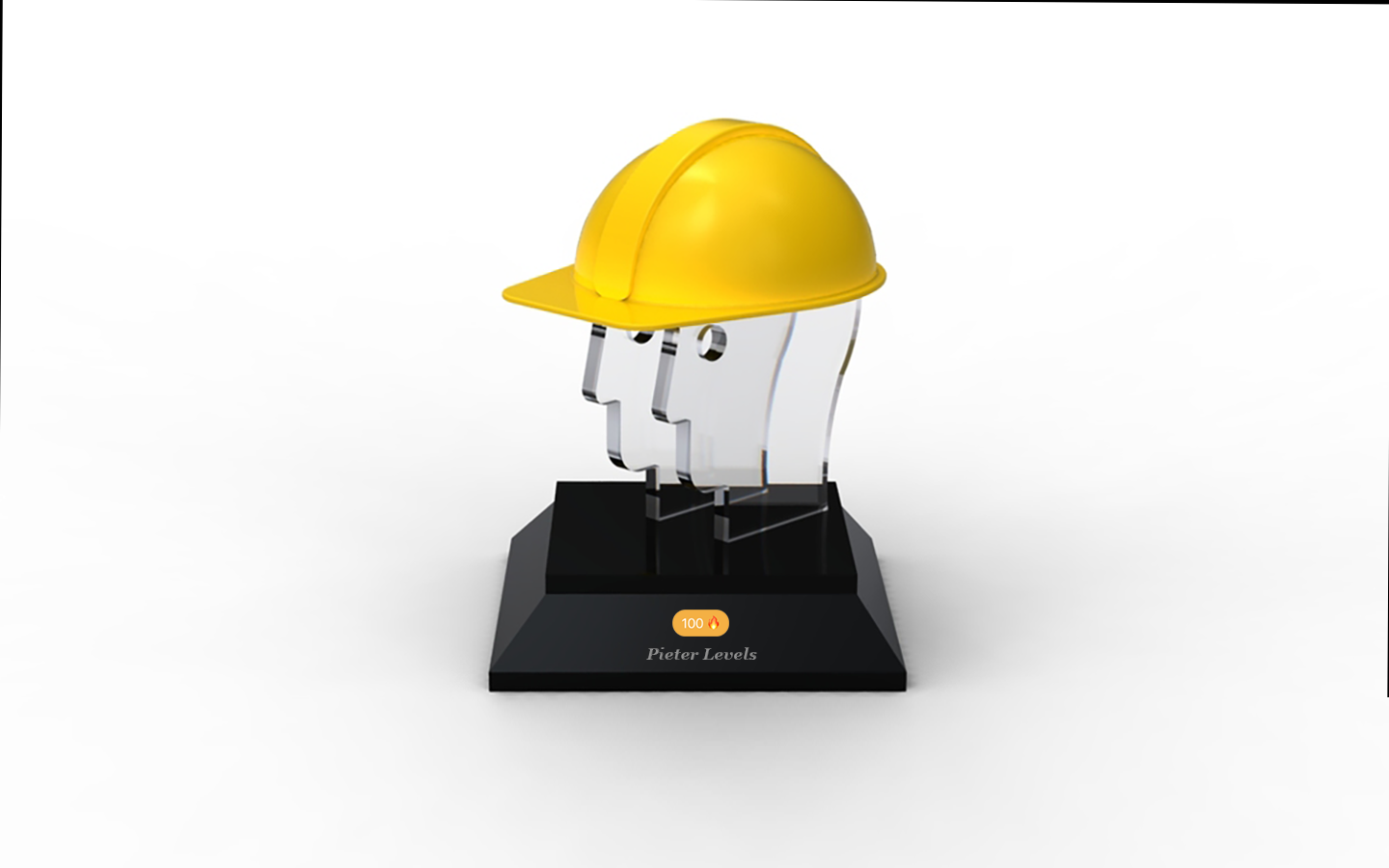